Alexeï Navalny’s teams want to mobilize against the Kremlin 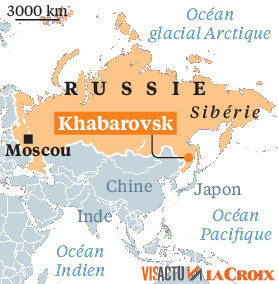 Alexeï Navalny’s teams want to mobilize against the Kremlin

More than two months after the imprisonment of the most famous of the opponents of the Kremlin, Alexeï Navalny, his teams, national as well as regional, are working to continue the fight, despite the relentless repression and the searches which are multiplying in the homes of the figures of the opposition or simple activists.

In Khabarovsk, hotbed of protest in the Russian Far East, Alexeï Vorsin, leader of the local opposition and declared candidate for a deputy seat in the Federal Duma, saw the police arrive at his home on Friday March 19. He is now stranded at his home, under house arrest, while the prosecution has launched criminal proceedings against him for participating in unauthorized gatherings. “His arrest is linked to his candidacy for the September elections. The authorities fear his activism… ”, says Alexander, a young protestor from Khabarovsk, reached by phone.

Same situation in Moscow for a large part of Alexeï Navalny’s close guard: his brother Oleg, his spokesperson and chief organizer Kira Iarmych, his coordinator in the capital Oleg Stepanov … Ten relatives of the opponent are prosecuted for “Violations of sanitary standards” because they orchestrated protests in January without respecting anti-Covid restrictions. Their house arrest was extended until June 23, depriving them of access to the Internet, a key tool in the protest against the Kremlin’s propaganda.

Chance or not, in Moscow as in the regions, several representatives of Alexeï Navalny came, like Alexeï Vorsin, to express their intention to stand in the September elections, a mixture of legislative and local elections. From region to region, however, the situation differs. “At home, the repression has calmed down”, testifies Alexeï Gresko, coordinator of the HQ of Navalny in Ekaterinburg, big city of the Urals and other center of the dispute. Since January, he has been arrested twice: twelve days in prison for having participated in the reception of Alexey Navalny at Moscow airport on January 17; then ten days for a call to demonstrate on January 23.

“Among the population, we feel a growing interest in our activities. The authorities thought they could block our mobilization. But even Navalny’s arrest does not prevent us from continuing to work. The risk of having me incarcerated again exists at any time. My wife knows that. She worries, but supports me “, says Alexeï Gresko reached by phone. He says he always has at home “A bag ready for prison: tracksuit, radio, toothbrush, book …”

In Yekaterinburg, Khabarovsk, and some thirty other cities across Russia, Alexey Navalny’s headquarters are preparing for the next step: to organize a large anti-Kremlin demonstration in the spring. Declared objective: 500,000 participants. The January rallies resulted in the detention of 11,000 people, most of them released but still in the crosshairs of justice.

To mobilize public opinion, its teams draw attention to the current conditions of detention of their leader, which are particularly trying. Thursday, March 25, his relatives reported “Recourse to torture by deprivation of sleep”. Alexeï Navalny, who suffers from the back, says he is awake “Eight times a night” by his jailers. He asked by mail to the prison administration and the general prosecutor’s office to “Receive care”.