Assassination of Samuel Paty: six questions on the Values ​​of the Republic teams, which support teachers in each academy 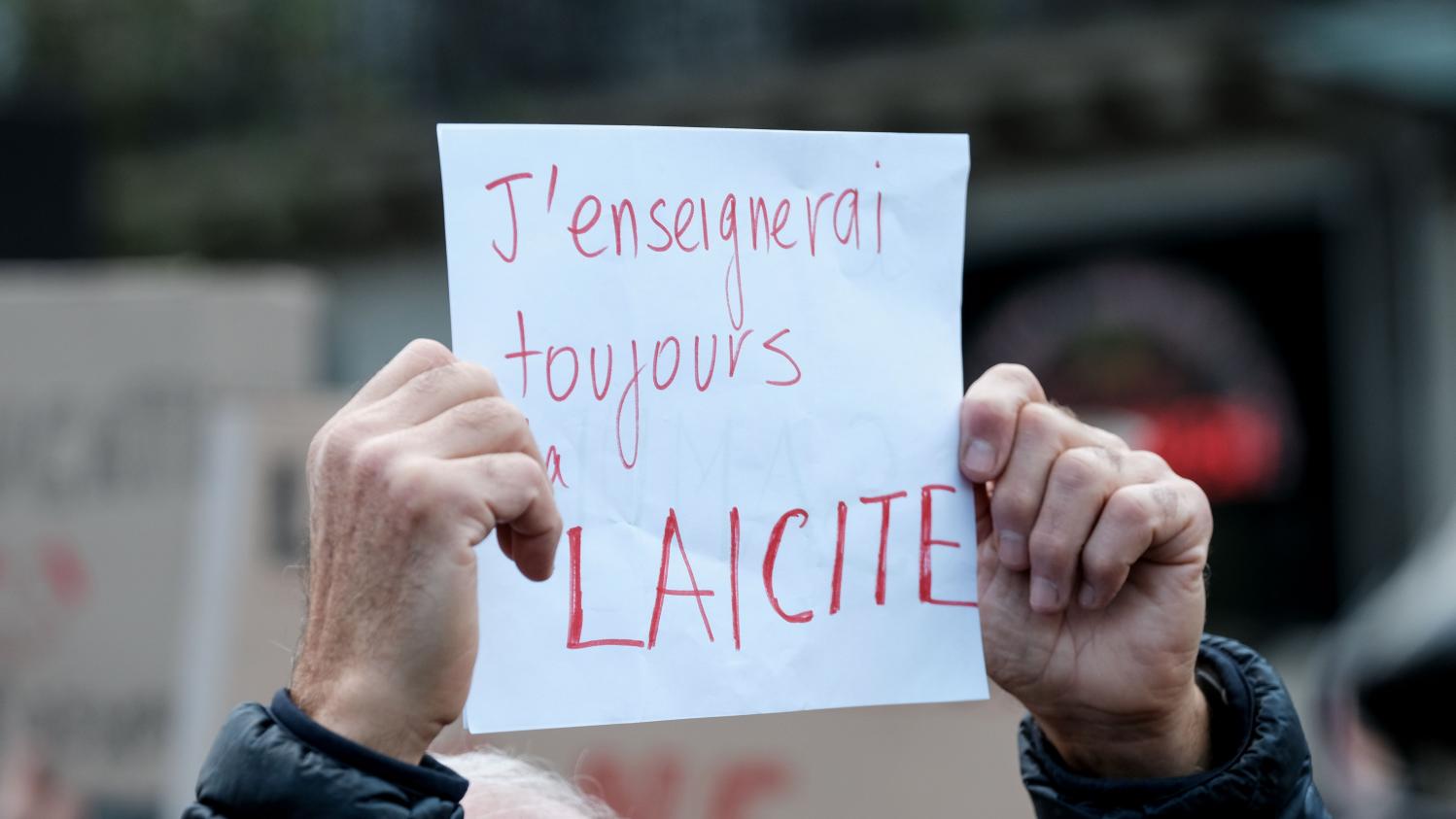 Assassination of Samuel Paty: six questions on the Values ​​of the Republic teams, which support teachers in each academy

After the controversy aroused by the course on freedom of expression given by the professor of Conflans-Sainte-Honorine on October 6, the principal of her college had asked the Valeurs de la République de Versailles academic team to find a solution.

A few days before his assassination by a young Islamist terrorist, Friday October 16, 2020, Samuel Paty had met the Values ​​of the Republic team at the Versailles Academy to seek advice. The reason ? During his moral and civic education course on freedom of expression, this history and geography teacher at the Bois d’Aulne college in Conflans-Sainte-Honorine (Yvelines) had shown his fourth year students two caricatures of Mohammed. A lesson that had provoked the anger of some parents of students, including Brahim C., now indicted. It was to defuse the situation that these secularism referents were called upon. Franceinfo explains how these teams are made up and what their missions are.

Three days before the conflict in Conflans-Sainte-Honorine, all the coordinators of the Valeurs de la République academic teams met during an annual seminar at the Sorbonne on October 13. The opportunity for the National Values ​​team of the École de la République (Valerep), set up as a national observatory, to take stock of the actions carried out by the local teams, present in each of the 30 academies in France.

Since January 2018, the date of the deployment of the system piloted by the Ministry of National Education, the Valeurs de la République academic teams (EA-VDR) intervene wherever they are notified of breaches of the principle of secularism. They are overseen by the national team, to which they report their quarterly data.

The system is completed by a Council of Elders of Secularism, made up of 16 members including academics, academy inspectors and professors. This council is responsible for “specify the position of the educational institution in matters of secularism and religious facts.” He is also the author of two technical guides, Secularism at school and Act against racism and anti-Semistime, provided to faculty.

These academic teams benefit from a great deal of autonomy. Under the authority of the Rector of the Academy, the unique team of Values ​​of the Republic referents defines its strategy, priorities and sizing. Hence a great disparity in the human and technical resources provided to these teams, which operate in all schools, from kindergarten to high school. In that of Gilles Bulabois, inspector in the academy of Besançon (Doubs), which has 212,000 students, 16 of them work under its coordination: educational inspectors, school heads and members of the legal service.

The variety of skills within the team makes it possible to have an intersection of views on the apprehension of the reports raised and the responses to be provided.Gilles Bulabois, academy inspectorto franceinfo

This former history and geography teacher who became an inspector also oversees a network of 48 trainers, made up of teachers for middle and high schools and inspectors and educational advisers for pre-primary and elementary schools. None of them benefits from a discharge of service to the height of his mission of trainer, recognizes Gilles Bulabois, whose load of referent Values ​​of the Republic came to be added to the pre-existing others.

2What are their missions ?

For the Ministry of National Education, contacted by franceinfo, “the deployment of the Values ​​of the Republic teams in each academy is a response to the Obin report of 2004 concerning the fight against attacks on the principle of secularism”. He adds that “their mission has recently been enriched by the fight against the facts of racism and anti-Semitism.”

Sixteen years ago, the former Inspector General of National Education Jean-Pierre Obin already highlighted the attacks on the principle of secularism in schools in his report entitled “Signs and manifestations of religious affiliation in schools”. In his conclusion, the Inspector General invited the then Minister of National Education, François Fillon, “to train teachers to respond to disputes about their teaching”, to encourage inspectors to come to establishments; principals, to intervene in the classes; teachers, to talk.

It’s here [dans les établissements] where we have compromised, where we have retreated, ‘made compromises’ as we often hear it said, that we have observed the most serious abuses and the most sensitive sprains to secularism.Jean-Pierre ObinReport from the Ministry of National Education, June 2004

Today, Gilles Bulabois’ Valeurs de la République team, like all the others, is committed to ensuring that there are no more “compromise” by ensuring two major missions within the Bisontine academy. On the one hand, it identifies and manages all breaches of the principle of secularism that are reported to it by providing the educational body with educational, pedagogical and legal responses.

On the other hand, it does prevention in the field thanks to a “important” training component. All new entrants to the academy are thus trained in the fundamentals of the values ​​of the Republic over one day. “We always start with concrete cases to study what their reactions would be and see together the answers they can provide” explains Gilles Bulabois. “There is also the possibility of training, on a voluntary basis and depending on the number of places, in specific themes such as the teaching of religious facts for example” specifies the inspector.

3When do they intervene?

As soon as a report of violation of the principle of secularism is sent to them. Between September 2019 and March 2020, around 935 reports were recorded according to the Ministry of National Education. A third was treated directly within the establishment concerned. The remaining two-thirds, or 630 cases, required the intervention of an academic team. Of these, 120 have leads to the movement of teams within an establishment.

Most of these reports come from colleges (45%), 37% come from schools and 18% from high schools. As for the perpetrators of the facts reported, more than half are students (57%). The proportion of parents who perpetrate “attacks against the values ​​of the Republic” is increasing, from 19 to 22% between 2018 and 2019.

The national team distinguishes five categories of attacks on secularism: the wearing of signs or outfits ostensibly manifesting a religious affiliation; contesting a teaching; refusal of a school activity; the suspicion of proselytizing. The fifth category brings together all “other facts disturbing the functioning of the establishment” such as insults or fights over religious arguments or prolonged absences during religious holidays.

The reports that have come back to us the most concern teaching challenges and refusals of activities. For example, a student who refuses to read a text in French because it is linked to a religious text or who questions secularism during the presentation of the secularism charter or another who refuses to go to the swimming pool.Gilles Bulabois, Values ​​referent of the Republicto franceinfo

4How are they solicited?

After almost two years of existence of his Valeurs de la République team, Gilles Bulabois notices that the teaching staff is reacting “better and better” infringements of the principle of secularism, by asking his team via the head of the establishment or via the online referral form “attack on secularism” from the Ministry of National Education.

“In our academy, we have also deployed the digital application ‘Institution facts’, since 2015”, specifies the inspector. This support provides resources and allows National Education staff to ask a question as soon as they feel the need. “As on the possibility of a religious practice in boarding school, for example, or on the issue of meals on school trips” completes Gilles Bulabois.

“No report, no question remains unanswered” he assures. “We are thinking together, with the legal service, on the response to be provided in order to defuse the situation quickly. We provide advice in terms of posture and by recalling the official texts on which the teaching team can rely.”

Like all academic teams, Gilles Bulabois’ team never meets students directly. “We are building specific support with the management of the establishment and the teachers concerned only.” In certain cases where the answer to be provided is complex, the academic teams can call on the national team, which can in turn turn to the Council of Elders of Secularism.

5What did they do at the college in Bois d’Aulne?

At first, Samuel Paty alerted the principal of the college in Bois d’Aulne, faced with the mounting reactions of some parents of students after his course on freedom of expression, given on October 6. The latter first sent parents a message of appeasement, said the Academy of Versailles in a recent press release. Then she asked for help from the academy, which mobilized the Valeurs de la République team. The latter went to the college to meet the teacher and the teaching team. “She spoke with Samuel Paty and reassured him in the approach he had taken during his course”, specifies the Academy of Versailles.

The team [VDR] He also advised him to come back to this session with his students in order to calm the situation and remove any misunderstanding that might have arisen.Academy of Versaillesin a press release dated October 18, 2020

A procedure “classic” for the Ministry of National Education.

Eighteen months after the deployment of the Values ​​of the Republic teams in the academies, progress remains to be made, according to the General Inspectorate for Education, Sport and Research, IGÉSR. In his report on “The application of the principle of secularism in schools of public education” completed in November 2019 and presented at the national seminar on October 13, 2020, General Inspection presents fifteen recommendations “for a continuation and a reinforcement” missions of the Values ​​de la République academic teams.

In the areas for improvement presented, IGÉSR refers in particular to the time limit for replies. If in the field the answers are provided on average within 24 hours, those given by the national team arrive “between five days and six weeks” with the academic teams who had, in the meantime, to settle the reported reports.

Another pitfall: the “reporting culture” did not take uniformly across academies. Some expressed their difficulty in disseminating it within educational teams and asked for a national pooling of good practices to help them. For their part, many school directors and principals admit having difficulty in qualifying the facts as an attack on secularism with which they are confronted. But it is important, remember IGÉSR, that the latter become aware of their role and invest it fully.

Even today, many school principals and secondary school principals do not master the conditions for applying the principle of secularism (…) and are therefore totally helpless when they are faced with a strong protest in their establishment.ExtractReport of IGÉSR, November 2019

Efforts also remain to be made on supporting pre-primary and elementary schools, where the ministerial system is “little known or poorly understood” and where reported attacks on secularism are on the increase.