At the trial of the January 2015 attacks, Miguel Martinez deconstructs his image as an arms trafficker and “bearded” in the case 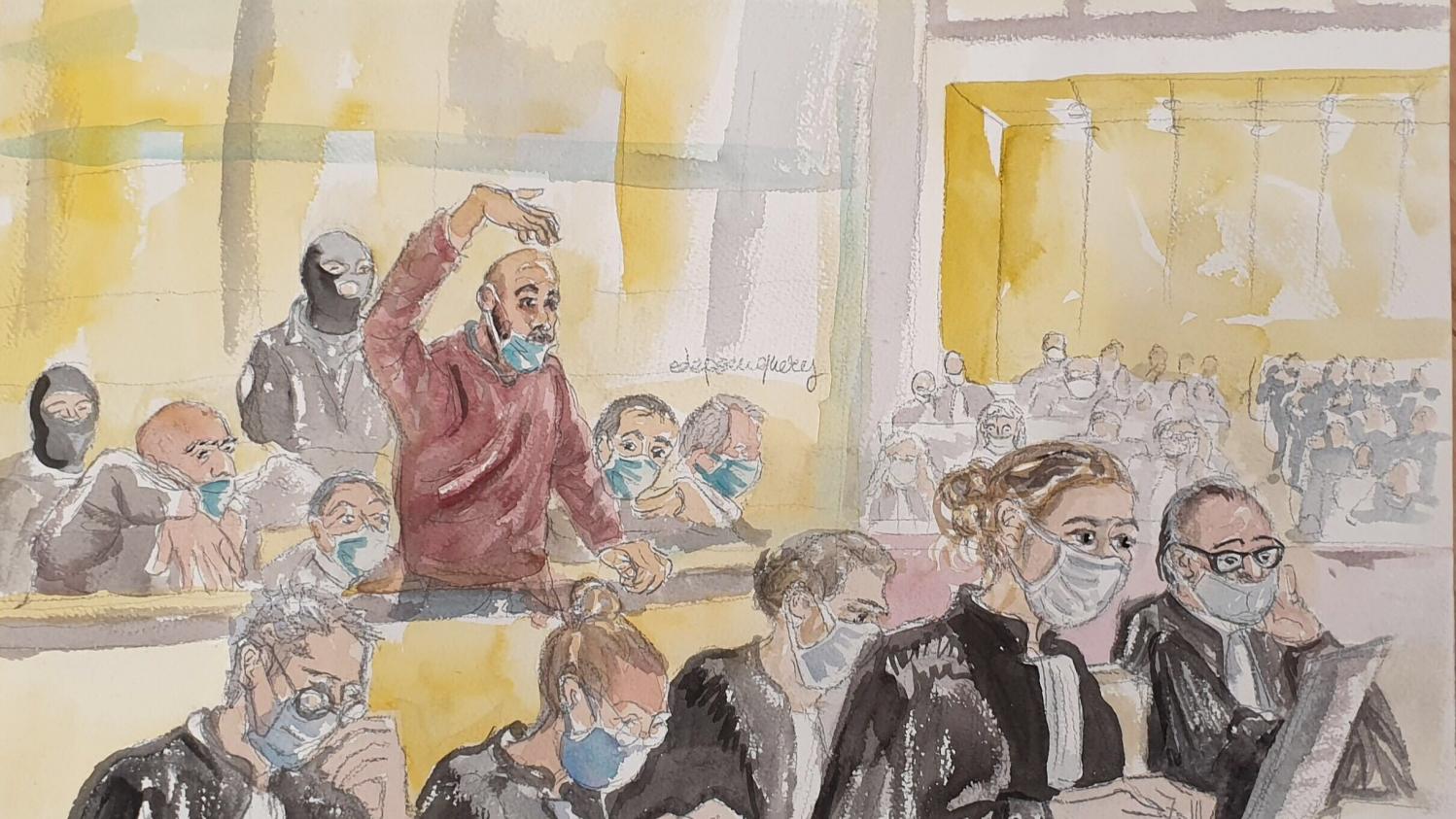 At the trial of the January 2015 attacks, Miguel Martinez deconstructs his image as an arms trafficker and “bearded” in the case

This 38-year-old man, former associate of Abdelaziz Abbad in a garage in Charleville-Mézières, admitted having played an intermediary role in transporting weapons but denies any involvement in the terrorist file.

Miguel Martinez has been waiting for his turn “long time”. He is the tenth – and penultimate – accused to be questioned at the trial of the January 2015 attacks, Thursday, October 22. He is already standing, ready to answer questions from the Special Assize Court in Paris, when the debates begin. From the top of his “two meters”, as he likes to remember, this 38-year-old man with a shaved head and a rust-colored sweater is as clear in his remarks as Abdelaziz Abbad was confused in his on Wednesday. The two, side by side in the box, are inseparable in the case: not only did they run a garage together in Charleville-Mézières, in the Ardennes, but they are the only two accused to have spontaneously mentioned Saïd Kouachi during their firsts. custody hearings.

Miguel Martinez, arrested in spring 2017 in the arms section of the folder, thus remembers seeing him in his garage three years earlier, in the company of a man whom he identifies on a photo board as his brother-in-law, Tarek Bouarfa. It must have been in September 2014 because “they had jackets, it was cold”. “In the Ardennes, there is no Indian summer”, slips the accused, who likes to make asides on “the middle” where it comes from. The purpose of this visit? “A tire change.” Miguel Martinez does on the occasion, with “unbeatable prices”. Why remember it? “Saïd Kouachi had a fairly striking face, with a dark complexion, clear eyes and a flattering mouth. “ Above all, why talk about it during this first hearing, two years after the attacks?

I thought that (talking about Saïd Kouachi) could be useful for the investigation. I am against what happened, I am against terrorism, so if I can help.Miguel Martinezbefore the special assize court

Have the two men exchanged? “He was there as a guide, he didn’t say a word, just ‘thank you’ starting”, assures Miguel Martinez. This first element to charge evoked, comes the second: the weapons. Like Abdelaziz Abbad, Metin Karasular and Michel Catino, he is suspected of having sought and supplied weapons to the Kouachi brothers and Amédy Coulibaly, via a fourth accused, Ali Riza Polat. After denying en bloc during the investigation, Miguel Martinez “wants to end it” and says he is ready to take “his share of responsibility”. Which amounts, according to him, to an intermediary role played out of friendship for his partner Abdelaziz Abbad.

In the spring of 2014, the latter was implicated in a homicide case against a backdrop of settling of scores – for which he was sentenced on appeal to 25 years, in November 2018. Barely open, the garage and all that goes with, “sweat money”, the right path, fall into the water. Abdelaziz Abbad, more or less “on the run”, at “need to do business again”. Understand : “dirty money”. He assigns Miguel Martinez, who must reimburse him for his shares in the garage, to go and see the side of Metin Karasular, in Charleroi. The Belgian advises to invest in weapons and gives contact to Ali Riza Polat. Miguel Martinez “hat” the other Belgian in the file, Michel Catino, 68, responsible for reassembling the bag from the Paris region.

Miguel Martinez admits having recovered the goods, given 500 euros to the carrier and put the bag ofyears a truck. Always at the request of the one he appoints “Mr. Abbad”, he finds a hideout in the Orzy district, in Revin, where he grew up. He also admits having seen two long guns at Metin Karasular’s garage, “presented in compensation” of the poor quality, according to him, of the first batch. It was “un old shotgun and some weird kind of rifle, which looked like it had been modified. Mr. Abbad decides not to take them. “

Pointing “significant developments” in his version of the facts, the magistrates of the court and of the public prosecutor’s office wonder: why did Miguel Martinez agree to go and see Metin Karasular instead of Abdelaziz Abbad? The accused pulls several arguments out of his sleeve. Her “build”, more imposing than that of his co-accused. His talents “commercial” – “you saw it, with Metin Karasular, we are going to start talking about numbers and we are going to end with the PKK, things are going all over the place “-; the impossibility for his partner to go to Belgium where he had “a pain” to be carried out – he nevertheless went there subsequently -; finally, his sense of friendship, which then takes precedence over his desire to “to change life”. “Me, outside the courts, I do not associate with lawyers, judges. It’s a matter of the environment, my friends remain the same “, explains the one who displays 20 convictions on his criminal record, for traffic offenses, drug trafficking and insults.

I did not participate in the business, I did not put a euro, but I have my share of responsibility for having found a place to put the weapons. I know it is reprehensible but it has nothing to do with the attacks.Miguel Martinezbefore the special assize court

“These weapons, I know they were stolen, I didn’t know they had ended up in the Meuse”, he continues, referring to the testimony of a woman in whom the bag was hidden and who said Wednesday at the hearing to have thrown some in the river for fear of reprisals. Two others were sold to a collector. “Regarding weapons, that’s what it is. ” We come to the third element to be charged: religion.

Miguel Martinez converted to Islam at the age of 9, after his father’s suicide. “Iwas in a neighborhood with a large Muslim population, there was no church, no chapel but a mosque “, he had underlined during his personality questioning. He completes, Thursday: “I needed to find an answer. It’s hard when you’re a kid to imagine that your father is rotting in a grave, you need to connect with something else. “. He deepened his knowledge of texts during his stays in prison, made a pilgrimage to Mecca in 2012. Grows a beard. Sometimes wear the khemi to go to the mosque. So many elements, according to him, which attract the attention of the intelligence services: “TAll the lights are on, I check all the boxes. “

“When I arrived in the judge’s office, she told me ‘That’s good, I had no bearded in my file’, Me Margot Pugliesi (her lawyer) will be able to confirm it to you”, assures the accused, whose beard, short, is hidden by the mask. Miguel Martinez strives to deconstruct this image. Tells of himself to the investigators having reassured his father-in-law, who was worried about this pilgrimage. “I was 135 kilos at the time. I said ‘You Think I’m going to do somersaults with Al Qaeda? ‘” At the hearing, this practicing Muslim is keen to talk about religion and is offended when the general counsel does not ask him any questions on the subject after it has been four years since “many accusations” on this point. It is his lawyer who takes care of it.

– “What are the links between religion and the Republic for you?

– The Republic, it is the law and the religion, it is of the order of the intimate, for me, that does not oppose.

– Do you think we can kill to defend the prophet?

– No, no, we can’t kill for nothing, we don’t kill guys who have made drawings, they are drawings, we have to leave that in its place. ”

Despite everything, an element has weighed heavily for four years in the thesis of radicalization of Miguel Martinez. Or rather a testimony. That of his partner’s father. This man, who still cannot digest that his daughter has fallen in love with a Muslim and continues racist clichés at the helm, confirms in tears that he saw his son-in-law watching a beheading video, “laughing out loud”, with friends. Beheading is “maybe not the right word”, he admits today. “It was about two men coming out of a Renault Clio and who put a shovel in the face of a woman. “ Me Pugliesi intervenes: “This video, I saw it, it seems to me that it is about the film Bernie by Albert Dupontel. “ Emotion in the room. Cellphones light up, the trailer matches. “Know, sir, that pDuring all these years of proceedings, my client made requests for release, and each time, he was opposed to this beheading video “, specifies the lawyer. “If it is a Dupontel video, it is indeed not a jihadist video”, concedes the first assessor. So much for religion. The last interrogation, that of Ali Riza Polat scheduled from Monday, should make it possible to assemble the last pieces of a puzzle decidedly with holes.