At the trial of the January 2015 attacks, the Assize Court lost in the contradictions of Abdelaziz Abbad 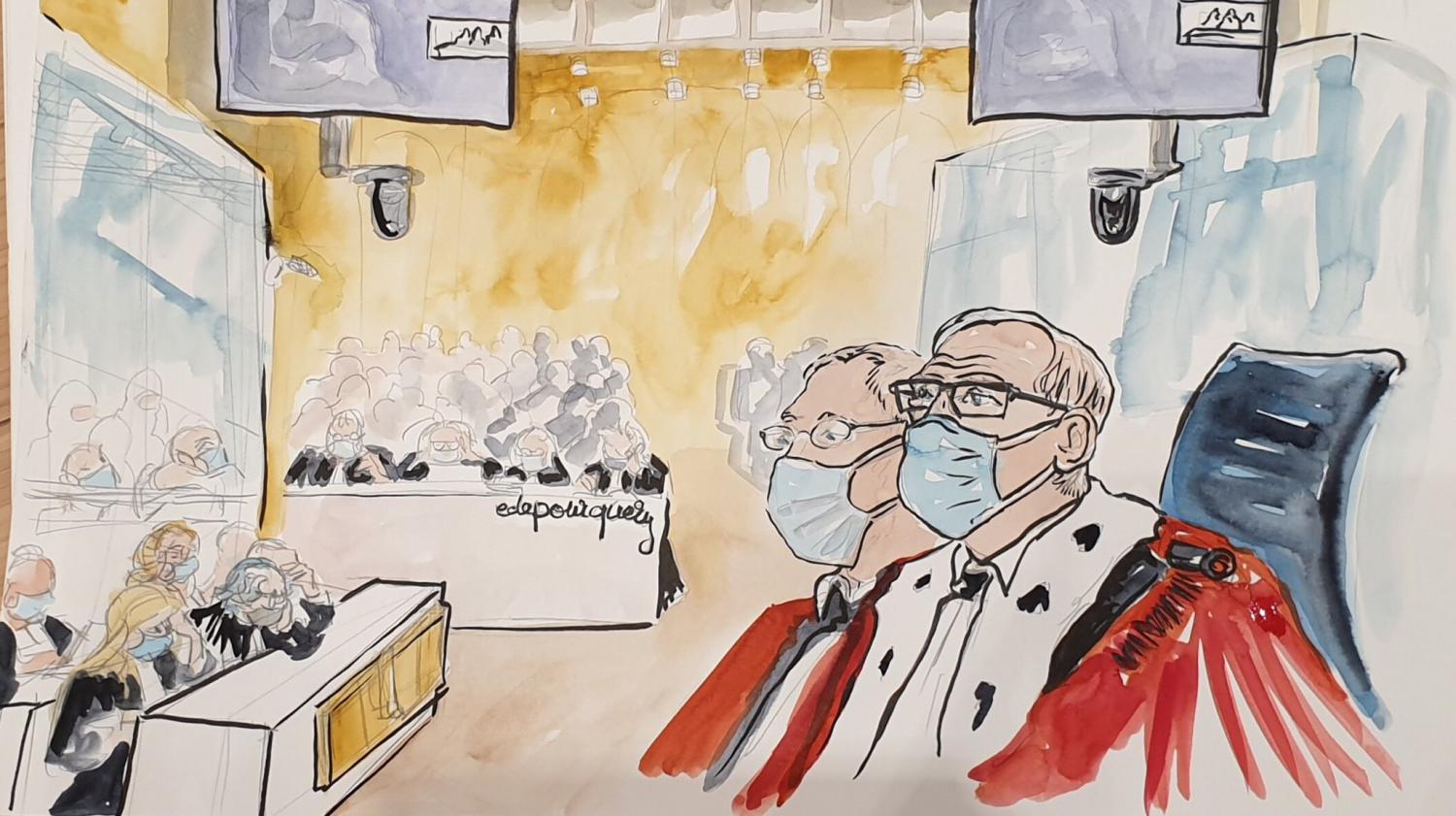 At the trial of the January 2015 attacks, the Assize Court lost in the contradictions of Abdelaziz Abbad

This 36-year-old accused is one of the only ones present in the box to be linked to the Kouachi brothers, but his different versions weaken the accusation.

Abdelaziz Abbad is the ninth defendant questioned by the Special Assize Court in the January 2015 bombings trial. He is above all the first to be linked to the Kouachi brothers. President Régis de Jorna made it clear from the outset, Wednesday, October 21: if the majority of the accused are being prosecuted for their assistance to Amedy Coulibaly, Abdelaziz Abbad is also prosecuted for having sought weapons for the terrorists of Charlie hebdo, more particularly for Saïd Kouachi. How was this link made? By Abdelaziz Abbad himself. A “self-incrimination”, as he says, which he has been trying to unravel for more than three years.

It is by telephone that this 36 year old man arrives in the file of the attacks. Notorious trafficker in Charleville-Mézières (Ardennes), he has several telephone lines, which he never keeps more than “three to four weeks”. One of them, opened with an assumed name in November 2014, intrigues investigators since it is in regular contact with three other defendants: Metin Karasular and Michel Catino in Belgium and Ali Riza Polat in the Paris region. Abdelaziz Abbad, whose extensive criminal record has just been weighed down by a case of complicity in murder, is therefore taken from his cell in spring 2017 to be placed in police custody.

It was during this first hearing that the name of Saïd Kouachi emerged, also from Charleville-Mézières. Abdelaziz Abbad explains to investigators that at the end of 2014, a certain Marouan H., his sister’s ex-boyfriend, came to see him in Revin (Ardennes) with a “type” who was looking for weapons. Seeing the photos of Saïd Kouachi on TV, he said to himself: “Oh, looks like the one came with Marouan.” “As soon as I released that name, they never let go”, regrets at the hearing the accused, his arms crossed, a black sweater matching his brown hair. Since then, its versions have continued to evolve.

“What is your position today?” asks the president. The convoluted answers of the person concerned do not help to see much more clearly. An assessor comes to the aid of the court and summarizes “the thesis of misunderstanding” defended by Abdelaziz Abbad: initially, this dealer converted into a mechanic, who continues to work in narcotics but also “occasionally” in arms trafficking, admits to having gone down on November 25 at Ali Riza Polat’s in Grigny (Essonne) on the advice of Metin Karasular. Version number 1: for narcotics. Version number 2: to find the weapons requested by Marouan H. and the “type” who looks like Saïd Kouachi. Which one was looking for “two Kalashnikovs, automatic pistols and a bulletproof vest”. Ali Riza Polat shows him a bag of weapons, some of which are rusty. Abdelaziz Abbad does not want it and leaves empty-handed.

Version number 3: Abdelaziz Abbad reverses the chronology. He goes down to Ali Riza Polat to find weapons to sell, they don’t like them, but he lets himself be convinced by Metin Karasular. According to the prosecution, it is Michel Catino who makes the trip to reassemble the bag, for 500 euros. Abdelaziz Abbad then meets the famous duo in search of weapons, presents them the bag. They don’t want it either. “Afterwards, this story turns into a puddle. Marouan tells you that they finally found what they wanted in Paris. You end up with this batch of rotten weapons, consider that Metin Karasular owes you a debt and that settles down as a heroine. Is that about the story? “ asks the magistrate. “Yes”, answers the accused.

So much for the versions given during the investigation, then at the hearing. For the facts, the prosecution holds that Abdelaziz Abbad limits January 3, 2015 to the garage of Metin Karasular, the day when Ali Riza Polat and Amedy Coulibaly meet the Belgian for an alleged exchange of weapons. He cut his telephone line on January 7, the first day of the attacks. The accused, calmer than during his hearings, as the first assessor underlined, loses patience: on January 3, he maintains that he went there to retrieve the heroin. And on the 7th, having cut his phone to escape the incessant calls from Metin Karasular who wanted to recover his money.

Since I had taken a carrot on my arms, I didn’t want to pay Karasular.Abdelaziz Abbadbefore the special assize court

Above all, Abdelaziz Abbad ensures that he never looked for weapons for Saïd Kouachi, who ultimately did not look at all like the individual who came to see him with Marouan H., he maintains.

The man in question wore “a beret, glasses, a mustache and a bomber”, perhaps “a disguise“, suggests Abdelaziz Abbad. “And he had a wand under his arm?” ironically Me Isabelle Coutant-Peyre, lawyer Ali Riza Polat. If the accused had established a resemblance with a photo of Saïd Kouachi without a beard, presented by the investigators, and with a snapshot seen on TV where he was wearing glasses, he changed his mind when the autopsy photo of the terrorist gave him is shown. “He has a beard, she’s like that”, he mimics from the box, pointing out that she cannot have pushed to this point between the supposed meeting and January 9.

For three years, the judge has remained on the fact that I may have seen Saïd Kouachi. You have to stop, I was in a common law story, I explained my trafficking to them. The history of terrorism is too much for me.Abdelaziz Abbadbefore the special assize court

“When you mention this resemblance, you know very well that you are in custody for this case, the assessor is surprised. Obviously, the police will have their ears pricked up. ” Did Abdelaziz Abbad see Saïd Kouachi all alone and implicate Marouan H., “who disrespected his little sister” and who owed him 4,000 euros in a drug case? “I’m not going to implicate a guy in a terrorism case for a relationship with my little sister”, he sweeps with the back of his hand.

Excluded from the case and heard as a witness, Marouan H. admits having gone to find the accused in December 2014 – on the 11th, according to the elements of the investigation – in Revin. According to him, the man in the beret and glasses who accompanied him was not Saïd Kouachi, but was a certain “Omar, from Châlons-en-Champagne” and he wasn’t looking for weapons but “weed”.

As for the bag of weapons, “a bullet in the foot”, “unsaleable”, according to Abdelaziz Abbad, it was first stored in a hideout in Revin, before being hidden under the bathtub of the companion of a relative of the Abbad brothers, heard at the bar. Two are sold to a collector, others are said to be thrown into the Meuse by the young woman, who claims to have been threatened and raped by Mustapha Abbad. Terrorized, she hides for a while in the woods with an ex-boyfriend to escape the Abbads, “a scary family in the Ardennes”, according to the latter. Also heard by videoconference from the prison where he is detained in another case, this witness dates this period to February-March 2015. After the January attacks.“These weapons, could they not end up in the hands of the terrorists?” Me David Apelbaum asks his client. “No way !” answers Abdelaziz Abbad. The court only has the interrogations of Miguel Martinez and Ali Riza Polat to try to answer this central question.