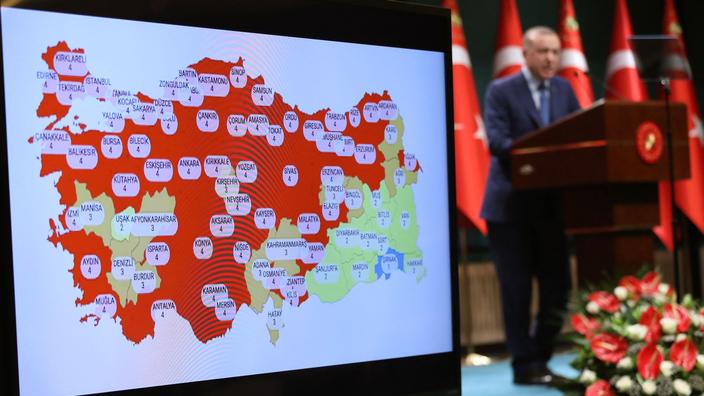 President Erdogan wants to speed up vaccination in his country but also to provide doses to “the whole of humanity”.

In recent days, in Ankara, the Minister of Health Fahrettin Koca has been on all fronts. The number of Covid-19 infections is increasing. Containment on weekends and the maintenance of the curfew have been announced. To counterbalance, the Turkish power seeks to give some avenues of hope. This week, he communicated extensively on national scientific advances in vaccines.

If in Turkey serums from the American Pfizer and the Chinese Sinovac are being injected today, “local” researchers are strongly supported by the state. Several projects are overseen by the Tübitak, the equivalent of the Turkish CNRS. Two of them look promising and are the subject of government-orchestrated hype.

A Turkish serum based on “viral pseudo-particle” technology is being developed in Ankara by a couple of scientists: Mayda and Ihsan Gürsel. Turkish Industry Minister Mustafa Varank greeted Wednesday “A very innovative method”. The serum has just entered the WHO list. Among the 84 vaccine candidates in the clinical trial phase identified by the world body, only three other laboratories are exploring this technology: a Canadian company (MedicaGo), an American (Vbi Vaccines) and an Indian institute. We use “A ghost of the viral particle. Without anything in it, it is totally emptied of its RNA, decrypts Stéphane Paul, immunologist at the CHU de Saint-Etienne. The latter, by assembling, form a micro-bubble. When injected into the body, it really mimics an infection of the virus. The structure of the Spike protein is very similar», Points out this member of the scientific council on vaccines, joined by Le Figaro. The formula has many advantages against Covid-19. First, “It is very immunogenic, there is not necessarily a need for an adjuvant, indicates the doctor. Then, it can be multivalent, that is to say it works against several variants with the same injection. Finally, it is less prone to side effects than adenovirus vaccines. Turkey says it will be designed with an undisclosed industrial partner, who could “Provide up to” 50 million doses “.

The Turkish Minister of Health on Wednesday unveiled the contours of another vaccine against Covid-19, which he describes as“unique in the world“. The dose is injected as a nasal spray against the common cold. “It’s a really very interesting approach, recognizes Stéphane Paul, who specifies that “not all countries have mastered this“. Vaccinating in the nose offers the advantage of providing rapid immunity locally, to prevent nasopharyngeal transmission. “It also requires a smaller amount of vaccine, about 1 / 10th of the dose needed intramuscularly.», Adds the specialist. When children need to be vaccinated, this may also allow for greater adoption, avoiding the “fear of the needle”. At present, in the world, this technology nevertheless carries a part of risk if it is badly controlled. “It has always been held back in its clinical development because there have been cases of Bell’s facial palsy. The barrier with the brain is very close: there may be a passage of the vaccine at the encephalic level ”, warns the immunologist. 250 million doses could be produced, reports the government agency Anadolu on Friday.

“A gift for humanity?”

These projects could help speed up vaccination in Turkey, which is slipping somewhat. As of April 1, 10.92% of the population had received at least one dose. For example, it is less than France (12.53%) … But Erdogan has other ambitions for his vaccines. During a UN videoconference meeting on Tuesday, the Turkish president stressed that he would put the doses “ available to all of humanity, once the work is completed“. This confirms his strategy which consisted so far in “Build diplomatic bridges between countries that produce vaccines and countries that have vaccine access problems“, As recalled Thursday the Minister of Health during a press conference. Erdogan regularly criticizes the difficulties of access to doses in developing countries. “He wants to register as a leader of non-aligned countries, against the great powers, explains Jean-François Perouse, researcher and co-author of the book Erdogan: Turkey’s new father?. This vaccine business is another opportunity for him to use this anti-monopoly rhetoric“.