Covid-19: remdesivir, this controversial drug that Indians are snapping up 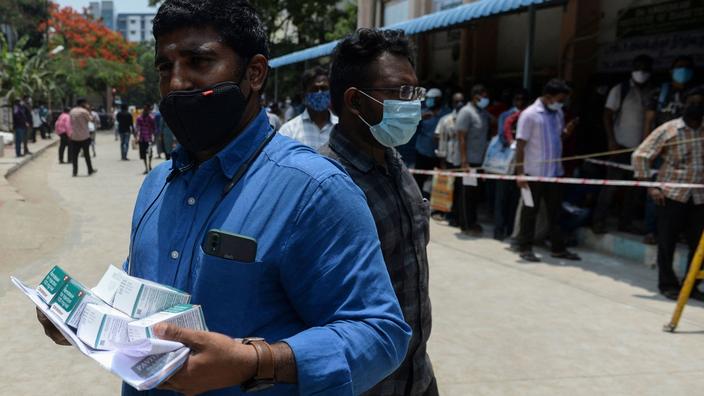 Covid-19: remdesivir, this controversial drug that Indians are snapping up

As the health crisis worsens in India, the price of this antiviral explodes on the black market. However, its use is not recommended by the WHO.

This is the holy grail. Getting a box of remdesivir has become an obsession in recent days for many Indians affected by the dramatic peak of the Covid-19 epidemic. Due to the shortage in hospitals, it is the responsibility of families to obtain this antiviral prescribed by doctors, the effectiveness of which is however controversial. Earlier this week, Manish Aggarwal, a resident of New Delhi, had to queue for eight hours in front of a pharmacy in the capital, in the hope of obtaining remdesivir for his father. In his hands, a precious “ticket” – a small piece of paper with the number 29 scribbled on it. “Finally, it’s a victory!», He exclaims when he comes out of the pharmacy.

Not all are so lucky. Many, desperate, turn to the black market. The drug sells for between $ 300 and $ 1,350 per bottle. Pranay Punj, in his thirties, ran to all pharmacies in Patna (Bihar) to buy remdesivir for her mother, who was very ill. A pharmacist finally offered to get him the famous antiviral undercover, he told AFP, for the astronomical sum of 100,000 rupees (1,105 euros), or 30 times its usual price and three times the salary. monthly average of a white collar worker in India. The excess around this treatment is limitless.

The status of remdesivir, produced by the US laboratory Gilead, is very controversial around the world. It is cleared by the FDA in the United States, and also by the European Medicines Agency. But it is not recommended by the WHO or by the ANSM (the French Medicines Agency). “My opinion is that it doesn’t work at all”, confides to Figaro Professor Frédéric Arnet, medical researcher in an Inserm / University of Paris laboratory. Many Indian doctors also say that remdesivir is not essential for treating people with Covid. But it is not banned in the country and hospitals continue to prescribe it. “Medicine is both evidence-based and also belief-based. An exceptional situation generates fears and behaviors – including among doctors – that go beyond rationality“Scientist, points out Frédéric Arnet, who is also the emergency director of the Avicenne hospital. “I call for the hype over remdesivir to end and to be used rationallyBegged Vinod Kumar Paul, a senior Indian health service official.

The redemsvisir is above all the story of a disappointed hope. During the first months of the pandemic, this broad-spectrum antiviral, originally used against the Ebola virus, seems to give some good results in studies. The results of the European Discovery trial, taken up by the WHO Solidarity study, have the effect of a bomb at the end of November: they show no significant decrease in “Overall mortality, the risk of having recourse to mechanical ventilation or the length of hospitalization”. As a result, the organization is positioning itself “against the administration of remdesivir […] insofar as nothing proves to date [qu’il] improves chances of survival“.

Read also :Covid-19: Any country can find itself in India’s situation according to WHO

In many countries that had started treating patients with this medicine, it continues to be used. Before the crisis of recent days, India exported remdesivir to poor countries around the world. A few months ago, the Gilead laboratory granted the country permission to manufacture it at low cost, as a generic drug, in seven factories. Two weeks ago, anticipating increased demand, New Delhi banned its export. The American laboratory Gilead has also promised to deliver 450,000 doses to the Indians. At the same time, the government is doing everything to speed up deliveries. According to official sources, he is trying to get it from countries like Egypt, the United Arab Emirates, neighboring Bangladesh …

Earlier this week, India even asked the European Union – which had ordered 500,000 treatments in October, just before the evidence of its ineffectiveness – to send it. It is not known how many doses have been delivered by Gilead to date. France had not ordered any. Belgium quickly responded to the Indians. She announced that aid with 9,000 bottles – worth 3 million euros – would soon fly to New Delhi.