9:54 a.m. : “Now that we have seen a lot of hindsight, we know that the vaccine has no particular side effects during pregnancy, so we have to be vaccinated.“

“Newly released studies challenge the link between vaccination and miscarriage”, assured on franceinfo Olivier Picone, gynecologist-obstetrician at the Louis-Mourier hospital in Colombes, in Hauts-de-Seine. The president of the research group on infections during pregnancy (Grip) therefore calls on pregnant women to be vaccinated against Covid-19 “at any time during pregnancy”.

09:47 : The number of daily deaths linked to Covid-19 has further increased in French Polynesia, with 54 deaths between Friday and Sunday, announced the Department of Health of this overseas collectivity. 311 Polynesians have died from Covid-19 since the start of the epidemic, more than half of them in the past three weeks, due to the rapid spread of the Delta variant in a poorly vaccinated population.

The Department of Health has identified 7,591 Polynesians currently positive for Covid-19 out of a population of 280,000 inhabitants. An underestimated number of cases, since most asymptomatic people are not tested.

09:43 : Covid-19: for Gabriel Attal (@GabrielAttal), delaying the start of the school year in Martinique and Guadeloupe “is a possibility” https://t.co/9C85POseQJ

09:43 : On BFMTV, Gabriel Attal also assured that delaying the start of the school year in Guadeloupe and Martinique was “a possibility”. “But there are no decisions made yet”, specifies the spokesperson of the government.

09:43 : The rector and the prefect of Guadeloupe have joined the elected officials of the island, which is experiencing a severe fourth wave of Covid-19, to ask the government to postpone the start of the school year which must be held in early September. “In view of the seriousness of the current health situation, the prefect and the rector have also expressed their concern and their commitment to work so that all health and educational guarantees are met for the return of the students to school”, declares the press release written by the prefect Alexandre Rochatte and the rector of the academy Christine Gangloff-Ziegler.

09:40 : The West Indies were hit by a fourth wave of Covid-19 of unprecedented violence this summer. Reconfined, Guadeloupe and Martinique are just beginning to observe the positive effects of the restriction measures. “We see that we are on a rather high plateau, but that we remain on a plateau, that is to say that it does not increase any more”, confirms to franceinfo the head of the emergency department of the Martinique University Hospital, Doctor Yannick Brouste.

09:48 : The Franco-Austrian laboratory Valneva, whose trials for its potential vaccine against Covid-19 are at an advanced stage, hopes to demonstrate “an efficiency greater than 80%”, announced its managing director Franck Grimaud on the BFM Business channel. Follow our live.

09:42 : According to Gabriel Attal, the government spokesperson, 85% of health professionals in institutions for the elderly are now vaccinated. A figure up by more than 20 points since the announcement of the vaccination obligation for caregivers by Emmanuel Macron on July 12. “The announcement of this obligation had a re-grasping effect for a certain number of professionals who had not wanted to be vaccinated”, he believes.

09:13 : Third dose: the first injections could take place “in mid-September” according to Gabriel Attal (@GabrielAttal) https://t.co/UMttbBLXZ9

09:13 : On BFMTV, Gabriel Attal, government spokesperson, assured that the first injections of the third dose for people over 65 and people with comorbidities could take place “in mid-September”.

09:11 : “I told the police unions that if we do not obtain a higher figure, 90% for example of vaccination rate, yes I will go through compulsory vaccination”, says the Minister of the Interior Gérald Darmanin https: //t.co/qRd2EaMg0H

09:11 : “Today the police are just over 70% of vaccination”, says the Minister of the Interior Gérald Darmanin https://t.co/ufSLa3S7a9

• An Afghan placed under surveillance on his arrival in France has been placed in police custody after having broken his house arrest, announced the Minister of the Interior Gerald Darmanin. Follow our live.

• The Paralympic Games open in Tokyo. Franceinfo sports gives you ten reasons to follow them. The opening ceremony will be watched live from 1 p.m.

Global warming has increased the likelihood and intensity of the floods that ravaged Germany and Belgium in July, claiming more than 200 lives and billions of euros in damage, according to a scientific study by the World Weather Attribution (WWA) .

Health Minister Olivier Véran expressed confidence on BFMTV last night, assuring that the peak of the fourth wave could be reached “in a few days”.

07:01 : At last, Flash East and Champagne Liberation are interested in the vaccination of 12-17 year olds which will be a major issue in the coming weeks according to the two dailies, while the health pass will be imposed on this segment of the population from September 30. 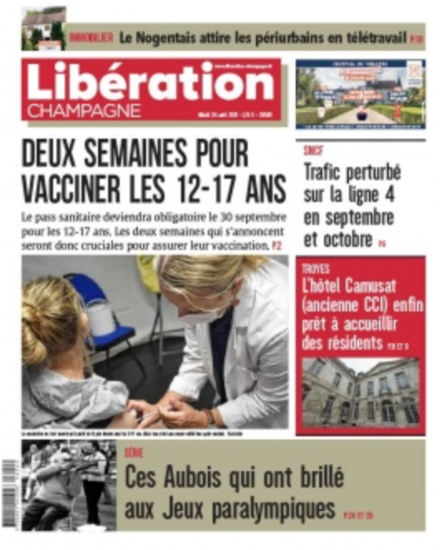 07:12 : As the start of the school year approaches, Release devotes a dossier on young people and Covid-19. Hospitalizations, seriousness of the disease in children, vaccinations of the youngest, health measures at school … The daily takes stock of the situation. 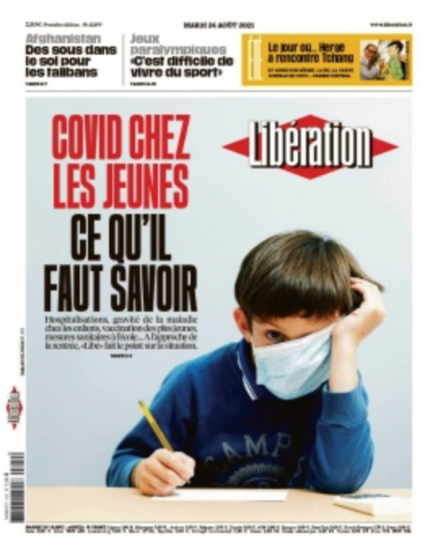 6:43 a.m. : “The rate of vaccination has been increasing for a month, but for several days we have exceeded 500 vaccinations per day on this site. We have even gone up to 700 people.”

In Guadeloupe, which is currently experiencing an outbreak of the epidemic, vaccination has accelerated, reaching more than 500 daily injections for several days, according to Tony Jerpan, chief medical officer of the departmental fire and rescue service (SDIS), who is the referent of the main vaccination center on the island.

07:25 : Marseille hospitals are “one of the most impacted university hospitals in mainland France” by the fourth wave of Covid-19, lamented their leaders. The Public Assistance-Hospitals of Marseille (AP-HM) wanted to sound the alarm. Of the 67 patients in intensive care due to Covid-19, 89% are not vaccinated and the average age in intensive care has dropped to 54 years.

• British Prime Minister Boris Johnson warned that the Taliban would be “judged by their actions” on the eve of a virtual G7 summit, where he intends to call on the leaders of the great powers to strengthen their “support for refugees and humanitarian aid”.

• The Paralympic Games open in Tokyo. Franceinfo sports gives you ten reasons to follow them. The opening ceremony will be watched live from 1 p.m.

Health Minister Olivier Véran expressed confidence on BFMTV last night, assuring that the peak of the fourth wave could be reached “in a few days”.

The prefect of Alpes-Maritimes announced the closure “for the next four matches played at home” from the south stand of the Nice stadium after the projectiles that led to serious incidents on Sunday during the match against OM.

What Are Car Lifts Used For?

Budget: the difficult negotiations of the presidential majority with LR

Pension reform: the 1961 generation will be the first concerned, announces Elisabeth Borne