Find here all of our live #TOUR_DE_FRANCE

13:17 : Editorial forecasts for this time trial: Marianne Chenou (the oracle, don’t forget) is playing it safe by betting on a success by Tadej Pogacar, when I will play the specialist card by tempting Stefan Küng , the wheeler of Groupama-FDJ.

1:07 p.m. : Tim Declercq, the last in the general classification, has just started in Libourne. Note that the Belgian has a comfortable margin to keep his red lantern, with 20 minutes more than the penultimate, the Dutch Cees Bol.

12:58 : In a few minutes, the riders with the lowest overall classification will set off for the last lap of the Tour. Note that the weather conditions will be more favorable to them.

10h53 : Since 2014, wearers of the distinctive Tour jerseys have the right to a tailor-made suit adjusted the day before by the seamstresses, at their hotel. Our journalist Adrien Hémard was able to follow the fitting session.

10h28 : @ Tour2021 The rider of the B&B formation is the adventurer who has spent the most time escaping on the Grande Boucle, without this translating into a victory, alas. We can also think of Julian Alaphilippe, regularly on the offensive, or of Wout Van Aert, who has been seen attacking on all terrains.

10h26 : A little word to support Franck Bonnamour for the title of the most combative of the Tour!

9:50 a.m. : Let’s look at the profile of today’s stage. If the riders will pass in a village called “Mountain”, the course of this time trial is as flat as the hand. 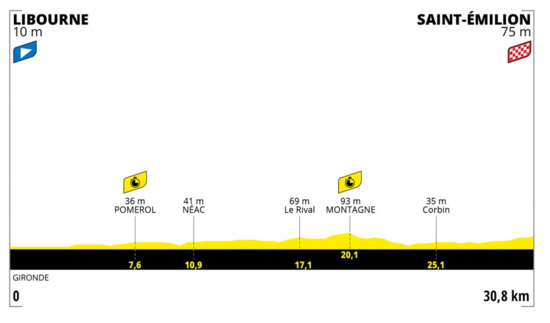 09:27 : @Tchao bello You never know eh, I remind you that last year at this stage of the race, we had to put in disaster all our papers on the coronation of Primoz Roglic in the trash because of a rocket called Tadej Pogacar. So beware, even if the yellow jersey is not in danger on the clock. On the other hand, for the other places of honor, I would be less categorical than you.

09:25 : Hello Pierre. Against the clock decisive? I am skeptical. Nothing will change overall. And it is not 30 kms on the flat that will shake up the hierarchy. Have a good day

• The death toll from the terrible floods that hit Germany climbs to 133 dead in Germany, local police say. In Belgium, the death toll stands at 20 deaths.

A first case of Covid-19 was detected in the Olympic Village in Tokyo, less than a week before the start of the competition. At this stage, it is still unclear whether it is an athlete or a member of a staff.

Such a situation had never arisen for a serving Minister of the Seals. Eric Dupond-Moretti was indicted for “illegal taking of interests” by the magistrates of the Court of Justice of the Republic responsible for investigating possible conflicts of interest with his former criminal activities.

Barring a cataclysm, Tadej Pogacar will seal his second success in a row on the Grande Boucle during the time trial this afternoon, between Libourne and Saint-Emilion. We should also know the riders who will accompany him on the podium.