The Tour de France started on Saturday, June 26, two weeks after the French football team started their tour of Europe, and they are on the eve of their round of 16 against Switzerland. On the Grande Boucle as at the Euro, the third week is decisive. Monday June 28, the Helvetians face the Blues of Didier Deschamps for this first match of the knockout phase. Heat, injuries, health bubble, the France group is facing difficulties.

Unlike the Tour, a fourth week is looming for the Blues. But to live it, it will be necessary to beat the Swiss, then to pass the stage of the quarter-finals next Friday. A path that the France team had already taken at Euro 2016 before failing in the final, then in 2018 to become world champion.

If the Blues finished first in their group, the second week of competition, instilled some doubts. Are the 2018 world champions capable of achieving the double, like their illustrious elders in 1998 and 2000? Beyond the results (one victory and two draws), there is the manner. Didier Deschamps, a few minutes after the match against Portugal (2-2), wanted to evacuate any doubt: “We finish first, other teams may have made a better impression but we are here. (…) We are very satisfied to be there once again.“

Arriving at their hotel in Bucharest yesterday, the Blues did a recovery session indoors and then in the pool #ProuddetreBleus pic.twitter.com/P6MdOWHNpV

Like three years ago at the World Cup, the France team still has some details to work out on the pitch after the group stage. But this time, it’s more outside the green rectangle that there is something to cringe. After experiencing the extreme heat of Budapest, but a view of the Danube from their hotel, their arrival in their new nerve center of Bucharest, more than 800km south-east of the Hungarian capital, was not up to par. of their expectations. A student party organized at the end of the afternoon below the two floors privatized by the French team “welcomed” them.

Heat, noise of the city center, the Blues face. “We have no worries. We know that we are privileged especially in this difficult period. We don’t complain. We are in good conditions. We could have a lot worse, we’re fine“, was keen to play down Presnel Kimpembe on Saturday in a press videoconference.

Yet the fatigue is there. The proof, several physical glitches came to disturb the group. In addition to Ousmane Dembélé, who had to leave his teammates due to a thigh injury, Thomas Lemar was hit in training on Thursday – he is recovering well from this blow to the ankle -, while Lucas Hernandez and Lucas Digne are not yet sure they will be able to play against Switzerland on Monday. 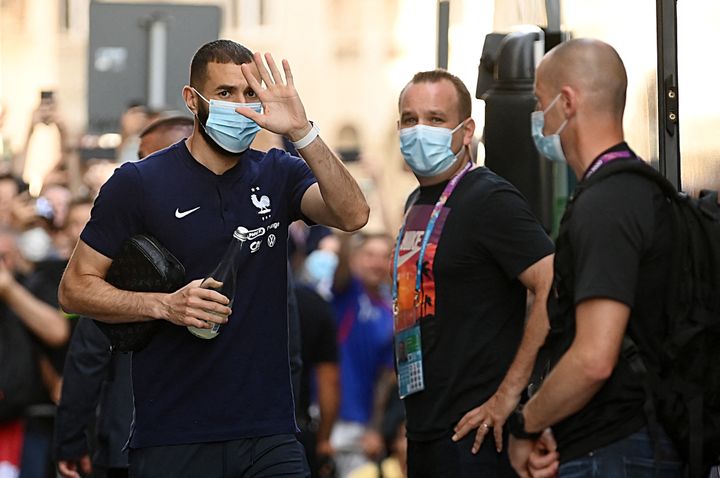 Karim Benzema during the departure of the Blues for training, June 26 in Bucharest (FRANCK FIFE / AFP)

To avoid any further injury and to recover from the plane trip, the players were exempted from the session on their arrival in the Romanian capital on Friday. On Saturday, the Blues were able to measure their popularity when they left for training behind closed doors, cheered by locals and some French supporters already present in Bucharest. Sunday, almost at the time of the Monday match, they will discover the National Arena, where they will play Monday against the Swiss, for training.

The health bubble imposed on the players of the France team begins to weigh, especially for substitutes and reservists who have not had the chance to play (Steve Mandada, Mike Maignan, Kurt Zouma, Clément Lenglet, Léo Dubois, Marcus Thuram and Wissam Ben Yedder have not yet played in a minute).

Condemned to spend their day at the hotel, the Blues find work, “by playing cards, some with reading, Netflix, the PlayStation, we chat with friends. We also watch the matches of our potential opponents“, enumerates Kimpembe. But the fact is that the time can seem long for the players gathered since May 26, especially as their relatives cannot approach the sanitary bubble.”We have the chance to do this job, we will not complain“, still wants to positively defender Paris Saint-Germain. The Blues do not want to be defeated.

Heat wave: new records for the month of May recorded on Saturday in France