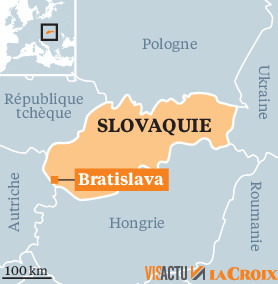 Of course, not all of Slovakia’s 5.4 million inhabitants have answered the call. Not all of them took a free test which, without being compulsory, was nevertheless strongly recommended.

But while, on Friday, October 30, the President of the Republic, Zuzana Caputova, deplored her “Poor preparation”, due in particular to insufficient staff and uncertain reliability of the tests, the vast operation of “Generalized screening” of the coronavirus was ultimately not the dreaded fiasco.

The long queues formed at some sites, including for motorists taking the tests administered in drive-in, did not prevent Prime Minister Igor Matovic, its main initiator, from calling “Success” this broad mobilization in such a short time, a great first on a European scale.

Thanks to the help of a large number of volunteers, the approximately 4,900 screening points and 45,000 health professionals, soldiers, police officers and other firefighters deployed on the territory of this small central European country made it possible to collect samples from more than of three million people, in the space of two days, Saturday 31 October and Sunday 1er November. Children under 10 and the elderly were exempted. Finally, only a little more than 1% of the antigenic tests carried out were positive, while Slovakia, Sunday evening, had a little less than 60,000 cases and 219 deaths related to Covid-19 since the start of the epidemic.

The most reluctant, them, will undoubtedly benefit from a second chance, next weekend, to be tested. A final decision must still be taken within the week by the team responsible for managing the health crisis within the government.

At first skeptical, for many of them, Slovaks have become aware, over the days and the deterioration of the health situation in their country, of the interest they had in participating in this screening. Because if the contaminated people detected recently are required to respect a ten-day isolation, the negative result certificate is used for all the others of pass to circulate freely, without incurring a fine of 1000 €.

In the spring, Slovakia, like its neighbors, had been rather spared by the virus. This time, no country in the region escapes the second wave. Hit hard with indicators steadily rising since September, the Czech Republic has thus become, along with Belgium, the European country where the spread of the disease is the most important, while Austria is in turn plunging back into the confinement from this Tuesday, November 3.

In Bratislava, we can therefore imagine that the impressive means implemented at the national level, over the course of a weekend, will soon allow the authorities to better target the restrictions. And even, perhaps, “On the road to freedom” according to Igor Matovic, to free oneself from confinement that is too restrictive for the entire population.