What if I went to see my cousin? It runs in a 3rd generation Renault Clio, bought new in 2010. Today I am testing a 5th generation released in 2019 and available in a hybrid version since last spring. Yes, it’s already autumn, we are not in advance to test this new model. Containment, deconfinement and summer vacation are not for nothing. But it’s impossible to miss the arrival of a new Clio, the best-selling car in France almost every year since its launch in 1991.

Each generation has indeed the same success as the previous one. In all, successive Clios have dominated the sales rankings 21 times in 28 years! So the change of regime (switch from thermal to hybrid) of Queen Clio is an event that cannot be missed, even with a little delay.

Two Clios, on the left of the 5th generation in hybrid version, on the right of the 3rd generation.

Hybridization side, the French manufacturer itself is not ahead. He preferred to focus on the electric with the Zoe launched in 2012 – the best-selling electric car in France – and take his time on the mixed. But it makes up for it by proposing an automatic gearbox with dogs (a device for coupling mechanical parts) which allows flexible and almost imperceptible gear changes.

Direction Normandy, its pastures, its cows and… its storms. On the A 13 motorway, traffic is heavy, there are many heavy goods vehicles, vans in a hurry, and the rain is falling like arrows on the enemy. We drive at 100 km / h maximum, it is not today that we will test the Sport mode. Hybrids generally consume a little more than thermals at high speed (especially because the weight of the vehicle is greater), we will not be able to test it either.

On the other hand, in the long descents of the A13, towards Chambourcy, Ecquevilly, the Mureaux…, one appreciates the gain of energy. Deceleration and braking (when a truck decides to overtake another, damn it…) thus become a little pleasure that we never tire of. Let us remind the uninitiated that in electric and hybrid cars, a device transforms kinetic energy (that of movement) into electrical energy, during braking or deceleration phases. These moments that drivers do not like in thermal are a source of energy but also of satisfaction in electrical!

To reinforce the regenerative deceleration, you can choose Eco mode. It is then almost useless to brake. You just have to stop accelerating to really slow down. But we prefer the Sense mode, with which the car manages the driving mode and the best way to recharge the battery. When it comes to electric motors, Renault has enough experience to be left in charge.

On the other hand, we are less convinced by the acoustics. Between the sound of the torrential rain and that of the engine, we do not enjoy as we would like a poignant piece by Dvořák broadcast on France Musique. 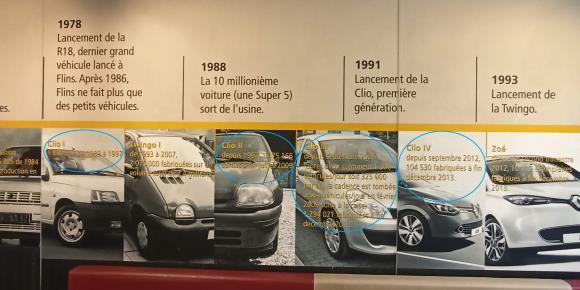 Frieze of models manufactured or assembled at the Renault factory in Flins, including the Clios circled in blue, in the cafeteria of the motorway area

On the Flins-sur-Seine motorway rest area, the little café is very pleasant. Rejuvenated, we greet with thought the workers of the nearby Renault factory where the Clios of generations I to IV were assembled. As a frieze in the cafeteria reminds us, this is where Zoes are produced today.

In Normandy, the weather is fine … several times a day. And when a ray of sunlight tears through the clouds, it is as if the world has just been born. There are fewer people on the road, we relax all the better as the seats have supported us well when we were driving stressed by the rain and the world. Sport mode, finally tested between two rinses, is effective but frankly a little superfluous in a city car like the Clio. 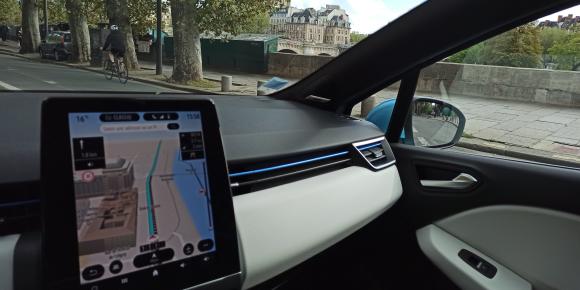 The central screen of the Clio E-tech hybrid

The 10-inch digital screen (installed vertically, like a book), on the other hand, is as useful as it is pleasant. It is also very readable and easy to use. Finally, its position slightly offset towards the driver is a guarantee of safety.

After Mantes-la-Jolie, we leave the highway for the departmental. The Clio is a city car, but it is also at home in the countryside, on small roads and through the villages that it passes through quietly, in electric mode. Ditto at the entrance to Rouen. One year after the explosion at the Lubrizol factory (September 26, 2019), not polluting is the least of things here.