In Orlando, Donald Trump poses as leader of the Republican Party 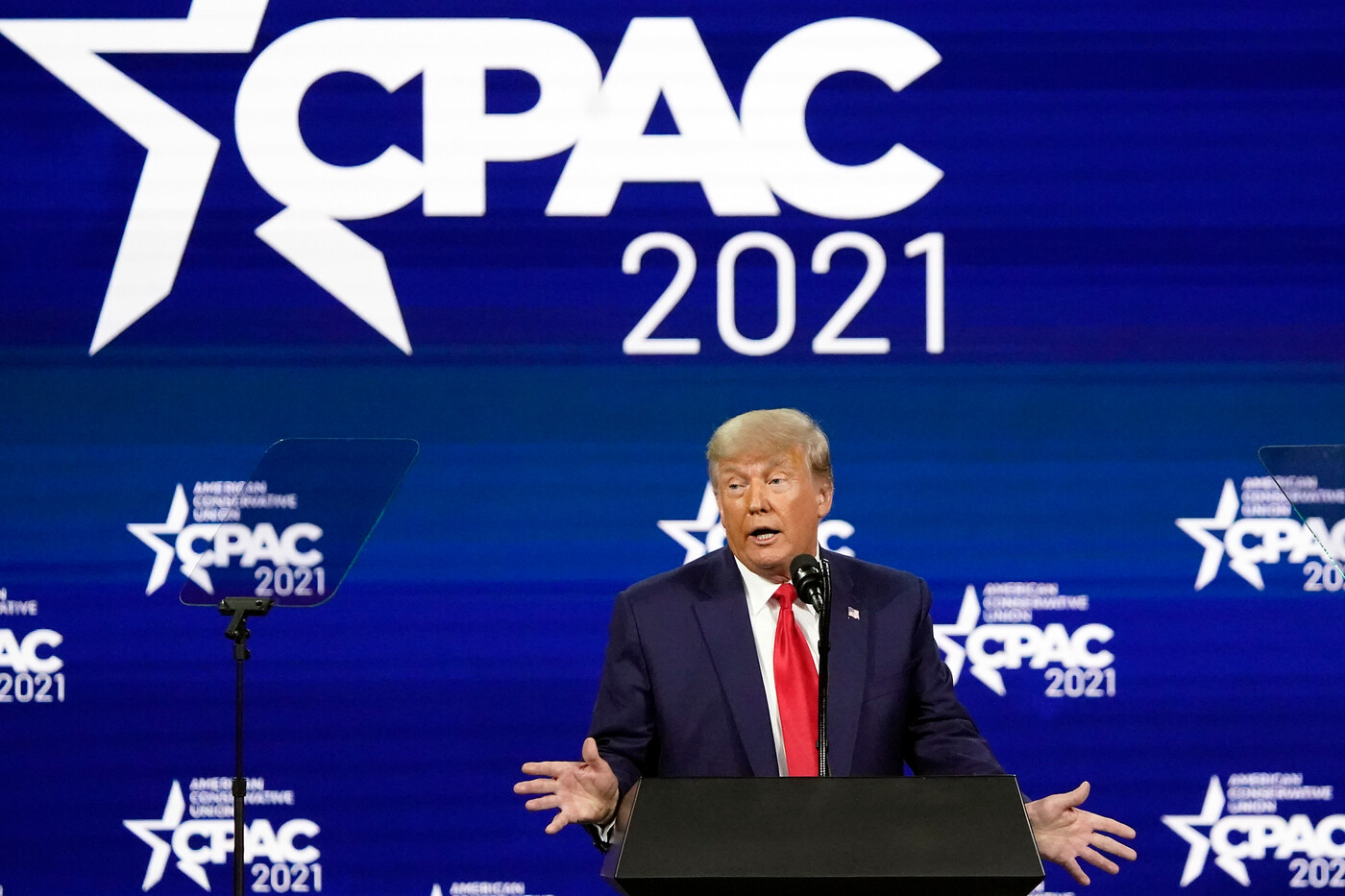 In Orlando, Donald Trump poses as leader of the Republican Party

” He is back », Welcomes Philip Whitby leaving the main hall of CPAC (Conservative Political Action Conference), the gathering of American conservatives. Donald Trump has just delivered his first major speech there since leaving the White House on January 20.

Arrived an hour late, the former president did not disappoint his fans, white-hot to the sound of Laura Branigan’s “Gloria”. Between self-congratulations, exaggerations and attacks against Democrats, the media, China and transgender athletes, Donald Trump regaled his audience for more than an hour. ” Who knows, I might decide to beat them a third time ”, he says of the Democrats, pretending to have won the November election. It did not take more to make the room roar.

Since the opening of the conference, Thursday, February 25, in a hotel in Orlando (Florida), the former president was on everyone’s lips and in everyone’s mind. During his speech, Donald Trump posed as leader of the Republican Party, defender of ” workers of all races ” and of “ America first “(America First). He returned to the election ” rigged “Of November, criticizing in particular the Supreme Court, of which he appointed three of the nine judges, for not” to have had the courage To intervene. ” Our electoral process is even worse than that of a third world country! “, he said. He also attacked the big tech companies (Twitter, Facebook …) who banned him and the ” cancel culture ”, name given to calls to boycott personalities or organizations in positions deemed controversial, which target their supporters.

Sweeping the idea of ​​launching his own party, he announced that he intended to get involved in the next Republican primaries to nominate candidates ” strong, smart, tough In the mid-term elections of 2022, crucial to regain control of Congress. Its objective: to “ get rid of »Elected officials who voted for his impeachment (impeachment) and his dismissal for his role in the siege of the Capitol on January 6. Starting with Liz Cheney, number 3 in the Republican Party in the House of Representatives, who has become the bête noire of the Trumpists.

The opinion is widely shared by his supporters at the Conference. “ We must elect republicans who work for us », Launches Patricia Triola, member of the group« Women for Trump ». ” He’s the only one who can be our leader, resumes Philip Whitby. We have good elected officials, but only Trump can bring everyone together. He has more energy than 20-year-olds! “exclaims the activist who wears a “Trump 2024” pin. Unsuccessful candidate for municipal elections in the ” swamp “From Washington, the Catholic Marya Pickering, she,” found the desire to fight After hearing Donald Trump speak. ” We cannot let the forces of evil, socialism, overwhelm us. Trump is the best president since Reagan. It is the president of the people “.

The 45e president was speaking in front of a conquered audience. According to the “straw poll” of the conference, the non-scientific poll conducted each year among participants, 97% support his record as president, two points more than last year, and 95% want the Republican Party to marry his nationalist “America First” policy.

However, the poll revealed two surprises: 17% of those polled said “ not certain “To want him to be a candidate in 2024 – a rather high rate – and only 55% would vote for him in the primaries (against 21% for Florida Governor Ron DeSantis, the” baby Trump “who appears in second place). ” Make America Great Again, (Donald Trump’s campaign slogan, Editor’s note) is a movement and a state of mind. Even with Trump gone the sun will continue to shine, says Chandler Crump, a 16-year-old African-American inspired by the billionaire. We will continue to fight. Donald Trump was our catalyst “.