INFOGRAPHICS. Covid-19: these curves that Europe must reverse to stem the second wave 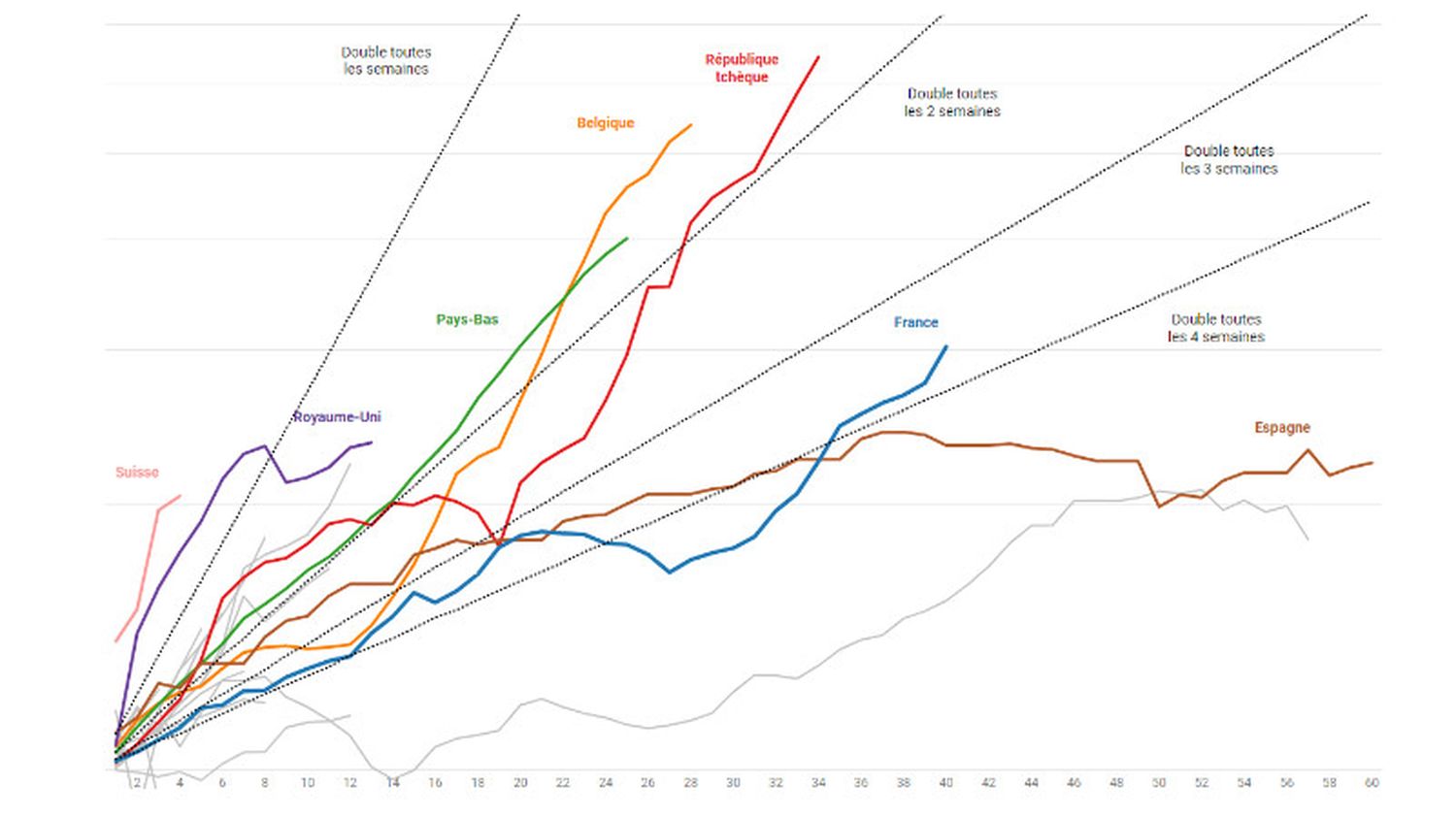 INFOGRAPHICS. Covid-19: these curves that Europe must reverse to stem the second wave


Dike the second wave. This is now the goal of many European countries, where the curves for the number of positive cases for Covid-19 are starting to soar again. And the macabre count of daily deaths is already starting again in several countries, including France. European countries are forced to take restrictive measures. The scenario of last spring seems to be repeating itself and the challenge is, once again, to turn the curves.

To follow the dynamics between countries, franceinfo compared the evolution of the number of positive cases for Sars-CoV-2 from the day when the threshold of 100 cases per 1 million inhabitants is exceeded. The virus is thus observing an outbreak in most European states. In some countries, such as the Czech Republic, Belgium or the Netherlands, the curves are climbing at a tremendous rate: the number of contaminations is doubling in less than two weeks. The most rapid growth is observed in Switzerland, where the number of cases is doubling every week. In France, the number of new cases reported to the population is one of the largest on the continent and continues to grow at high speed. Spain, for its part, seemed to have managed to contain the new contaminations, but the latest figures show a further acceleration of the circulation of the virus.

The challenge is now the same everywhere: to slow down the epidemic. To achieve this, European states are increasing social distancing measures. After France, Belgium decreed a curfew from midnight to 5 a.m. Slovenia followed suit on Tuesday. Wales announced from Friday 23 October the establishment of a two-week lockdown. Same in Ireland. In Switzerland, wearing a mask is now compulsory in closed public places. Austria, for its part, limits gatherings to a maximum of six people. And Italy has announced a new round of restrictions on bars and restaurants. As in the first wave, the effects of social distancing measures will, at best, be felt after several weeks. The “Virus management measures take two, three weeks to bear fruit, and then you have to maintain them until you not only reverse the curve, but it is at a sufficiently low level”, estimates the Minister of Health Olivier Véran.

Thus, the virus still does not appear to be receding in the Czech Republic, despite drastic restrictions taken a week ago, including the closure of bars and restaurants as well as schools and universities. With 521.5 contaminations per 100,000 inhabitants over the last fourteen days, the country is now the country in Europe most exposed to Covid-19. Faced with this outbreak of contaminations, the government has just asked the army to build a 500-bed field hospital outside Prague, the capital.

In this Europe in crisis, one country also stands out from the others: Spain, whose curve exploded several weeks before its neighbors, seems to have succeeded in containing the situation. At least temporarily. The number of new cases as well as the number of deaths is no longer growing as it was a few weeks ago. Should this be seen as an effect of the binding measures decided in early October? On October 2, the government imposed a partial closure of Madrid and eight neighboring municipalities. Since then, the 4.5 million inhabitants concerned can only go out to go to work or to go to the doctor. This partial confinement, imposed at the end of turbulent negotiations between the regional authorities and the government, applies to municipalities where the incidence rate exceeds the very high bar of 500 cases per 100,000 inhabitants. Since then, the restrictive measures have continued to expand. Despite everything, Spain is unable to reduce the number of infected per day. The government has announced that it is working on new measures applied across the country for the coming weeks.

In the meantime, countries are starting to count their dead again. France counted 652 new deaths linked to Covid-19 last week, the United Kingdom 771 over the same period and Spain 571. “If left unchecked, daily mortality could reach levels 4 to 5 times higher than we recorded in April.”, warned the World Health Organization last Thursday. The number of new victims is growing faster and faster in many states, including the Czech Republic, Hungary, Belgium, Poland, the United Kingdom and France.