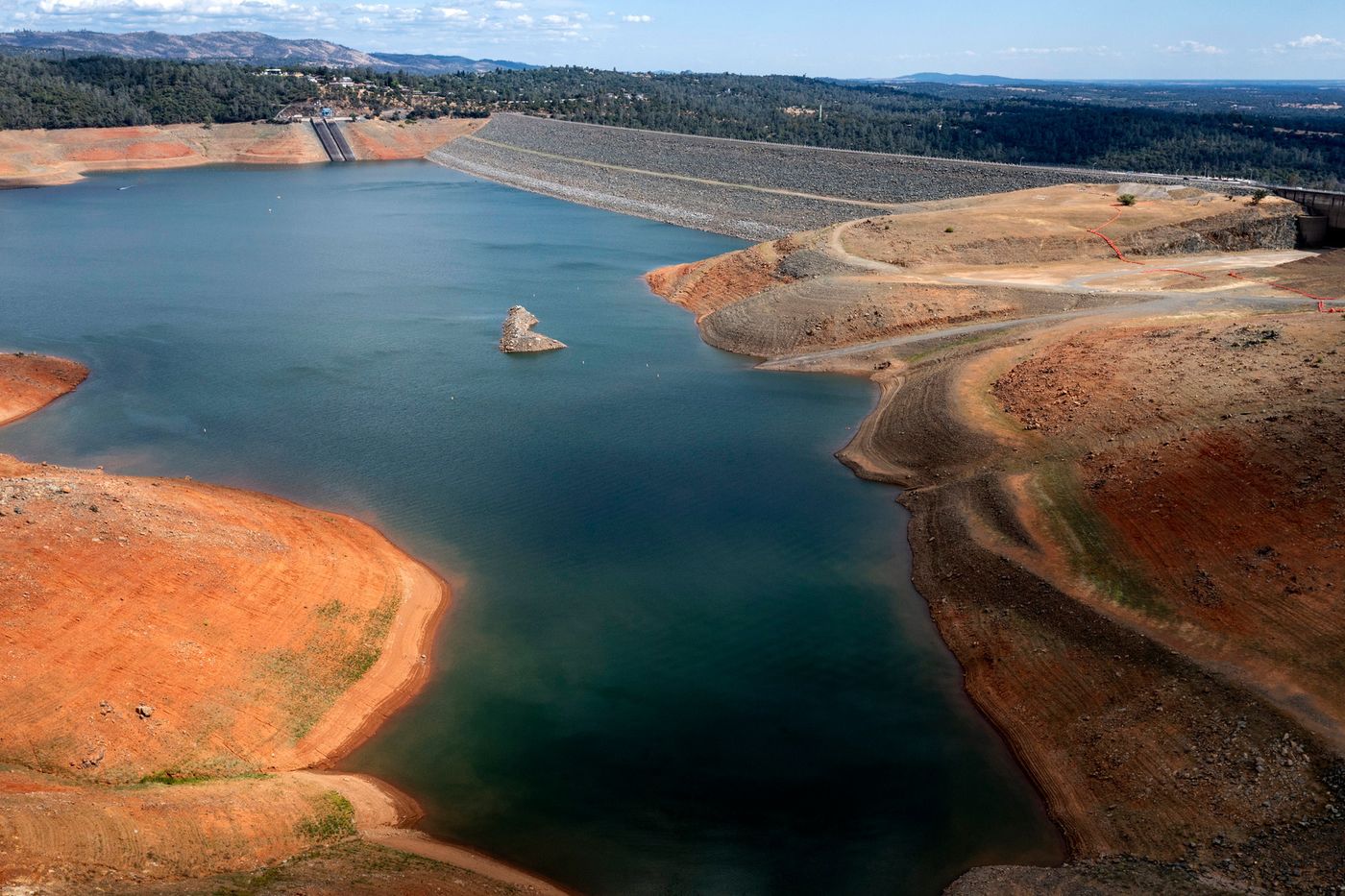 Her hand in a visor, Samantha Waterbury scrutinizes the ocher shores of Lake Oroville: “The water level has dropped again. On the surface, we are even starting to see small islands appear that no one until now suspected the existence.“. This farmer’s daughter knows Lake Oroville well. It is thanks to its reservoir – the second largest in California – that his father Eric irrigates his rice fields a few kilometers away.

→ ANALYSIS. Global warming, the alert level has been reached

The family also enjoys spending time on the surface aboard a pleasure boat. But last spring the Waterburys were forced out of the water because of the historic drop in water levels. “This had never happened to us“, assures Samantha.

Hit hard by the drought raging in the American West, the reservoir is today two-thirds empty. An exceptional phenomenon at this time of year. “The height of the water is 205 meters. In a normal year, it is around 260 meters ”, says John Yarbrough, assistant deputy director of the California Department of Water Resources.

In the Golden State, the high spring and summer temperatures have greatly reduced the snowpack of the Sierra Nevada, from which Californians derive a third of their water resources thanks to a gigantic system of aqueducts, canals and dams that provide ‘bring water throughout the state. Under the effect of the heat, part of the runoff from the snowmelt has also evaporated.

A problematic situation for California where the Oroville reservoir plays a central role: it supplies water to 27 million inhabitants and irrigates more than 300,000 hectares of agricultural land.

In Gridley, a small rural town a few miles from the lake, the verdant rice fields of Eric Waterbury at first glance seem not to have suffered from the drying up of the reservoir. “We received half the surface water from Oroville than last year”, however explains the farmer who was forced to give up cultivating a third of his 630 hectares.

→ MAINTENANCE. Global warming: “The world of tomorrow will be harder in many places”

“Fortunately, we also have the ability to pump groundwater through several wells dug on the property. But it costs a lot of electricity ”, he explains. “If the drought continues like this for several years, we will have to ask ourselves the question of the profitability of our agricultural activity”, remarks his daughter Samantha.

A little further north, in Orland, farmers and residents are fighting over groundwater. While dozens of domestic wells have dried up, county officials adopted a decree in late June banning farmers from digging new wells so as not to further dry up the area. “This is the first time in eighty years that my mother’s drinking water well is empty., testifies Valorie Pruitt. At 82, she is forced to rent a tank and buy gallons of water to fill it. A third of his retirement is spent there. She could sell but who is going to want a house without access to water? “.

Victim of the effects of global warming

This is not the first time that the Oroville region has suffered from the effects of global warming. Since 2018, several deadly fires, including the one in Paradise, have ravaged the area. In 2017, torrential rains overflowed the dam and caused the evacuation of 180,000 people living below.

“We have truly become the face of warming in Californiasighs Debra Lucero, Butte County Supervisor. We are hit hard by the drought because we have overexploited desert lands that were not made for intensive agriculture. It is only by conserving our water resources and rethinking our system that we will get by ”.

Drought and fires, a dangerous cocktail

1er April 2021, the snow cover in the Sierra Nevada reached only 60% of its usual surface. Six weeks later, this snowpack that feeds rivers and streams only represented 6%.

According to the latest records from government agencies, 88% of the West was in a state of drought, including all of California, Oregon, Utah and Nevada.

California, and the American West in general, are at risk of more and more mega-fires in the years to come. In this region, the fire season is already nearly 75 days longer than before.