When he gets out of his Range-Rover, Narendra Modi looks like an Indian Santa Claus coming to Buckingham Palace to give toffees to the queen’s grandchildren. With his long white beard, his traditional white clothes lit with orange – the color of purity in Hinduism – the Prime Minister of India seems gentle and wise like a kind deity. This is without counting its Islamophobic measures and the Hindu fanaticism that it encourages, and the big British SUV which indicates its power.

And what a clue! Since 2008, the Land-Rover brand – which offers several SUVs and all-terrain vehicles including the Range-Rover range – belongs to the Indian group Tata Motors. The same goes for Jaguar, another flagship of the British automotive industry. Tata even managed to straighten out both brands, while continuing to design and manufacture them in England.

A Rangie rather than one Jag

As the official car, Modi chose a Rangie rather than one Jag, probably because a mop vehicle (rover in English) sticks better than a luxury sedan to the anti-notable image it gives itself.

Other Indian manufacturers, including Mahindra, are multiplying the models to satisfy the appetite of the country’s middle class. Today India is the 4e world car producer, behind China, the United States and Japan, but ahead of Germany. With a billion inhabitants and only 30 million passenger cars (by comparison, there are 40 million in circulation in France), the automobile is a key economic sector in full development. On condition of course that the country equips itself with infrastructure and a good road network …

Trucks rather than cars

“Atmanirbhar Bharat! “ Whether they speak Hindi or not, a billion Indians know the meaning of these words. : Independent India. Until 1947, this was the slogan of the militants against the English colonist. Once this has been acquired, the formula has lost nothing of its relevance.

The population and its leaders Gandhi and then Nerhu knew that independence should be as much political as economic. As soon as he was appointed prime minister of the new India, Nerhu established the License Raj, which regulates and oversees the creation of companies. 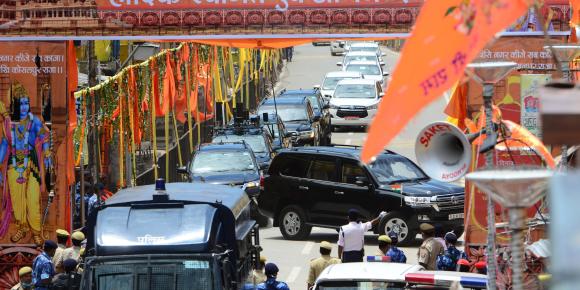 For the leaders of the very young Indian democracy, the economy must be planned, and development organized. The private car is not considered a priority. Only three Indian builders, in partnership with foreign companies, have the right to build them. To get the subcontinent out of poverty, it is better to take two-wheelers, buses and trucks.

Seven years later, to protect local brands, Nehru increases taxes on imported cars. So for decades, wealthy Indian families have the choice between … three models: The Fiat 1100, an Indian version made in Bombay of the small wagon of the Italian brand, the Standart Herald, a family sedan produced in Madras local version of the English Triumph Herald, and the Ambassador, a large top-of-the-range sedan (by Indian standards) manufactured in Calcutta. 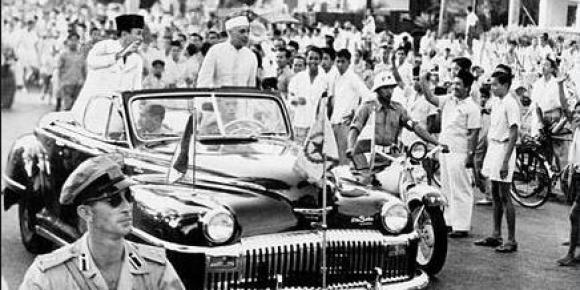 Jawaharlal Nehru (right) and an Indonesian city councilor visiting New Delhi, in an Ambassador in the early 1950s

Installing a builder in each of the country’s three major ports was Nerhu’s idea. Nothing really changed until 1991 and the liberalization of the Indian economy.

Personally, at that time, we drove in a “luxury” Ambassador (the cream of the Ambassadors) to link Agra to Benares, on the banks of the Ganges. Every hour the driver (it was not possible to drive yourself) would stop, fill the water tank and wait for the temperature to drop.

A “cooling” Luxury Ambassador between Agra and Benares

Then he set off again in a mad race at 40 km / h on a feverish road where ancestral trucks, crowded coaches, rickety bicycles, barefoot pedestrians, destitute and out of caste homeless, animals of all kinds (dromedaries, donkeys, stray dogs, cows sacred…) advanced, crossed, always doubled at the limit of the general pileup. Often, moreover, we passed trucks and cars overturned on the side aisles. We have never driven so slowly, being so scared …