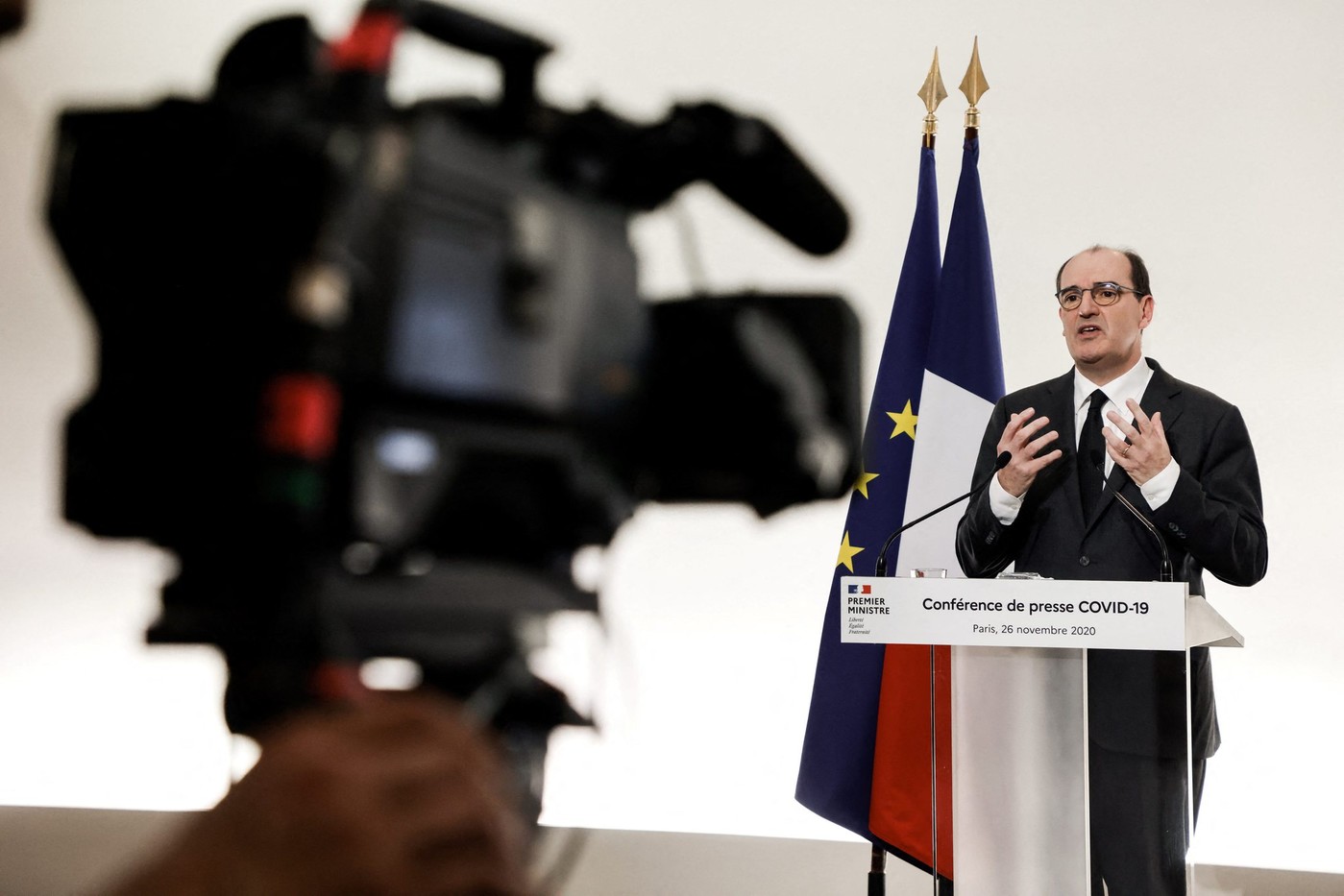 “The government will tell you next week its new“ test, alert, protect, cure ”strategy. They will also present to you its precise strategy for the vaccine ”, announces the Prime Minister.

Olivier Véran announces that the High Authority for Health has been tasked with giving recommendations to priority target audiences. “We are awaiting these recommendations for the end of November which will be consolidated during the first half of December”, he specifies. The National Consultative Ethics Committee was also seized. “It is important to be able to shed light on our responses”, he said.

If possible, Olivier Véran announces that the vaccination can start at the end of December.

Jean Castex announces three support measures which will be reinforced or applied, specified by Élisabeth Borne, Minister of Labor.

♦ Renovated solidarity fund. “From December, each company closed because of the confinement will be able to receive each month either 10,000 euros, or, if it is more advantageous, a compensation representing 20% ​​of the turnover realized over the same period as the year former “, says Jean Castex.

♦ Help for permittents and seasonal workers. “A guarantee of resources of 900 euros per month will be paid from November until February 2021 for those who worked more than 60% of the time during the year 2019”, explains the Minister of Labor.

♦ Creation of 20,000 student jobs. “These contracts will be signed by the CROUS for a period of 4 months at the rate of 10 hours per week”, explains Jean Castex, who announces “Doubling the budget allocated to CROUS to pay aid to students in precariousness”. In addition, a specific support system for the search for a first job will be put in place, in addition to the tripling of the means of the “1 young person 1 solution” plan.

“For the winter sports resorts, we estimated that the epidemic situation and that of the hospitals for the regions concerned do not allow us to consider an opening for the Christmas period. It would not be prudent to mix a large flow of population but it will be possible to go to these resorts to enjoy the pure air of our beautiful mountains. The shops will be open there. Simply, all ski lifts will be closed », he explains.

Finally, even if it will be allowed to celebrate Christmas and the New Year, it will be “Imperative” of ” limit “ the number of guests at these end-of-year celebrations, specifies Jean Castex.

Roselyne Bachelot specifies that, during the curfew, “A tolerance will be allowed so that the spectators of the screenings ending at 9 pm can return home quietly, by presenting as proof their ticket of spectacle or cinema”.

The Prime Minister recalls that from this weekend, places of worship will be able to welcome the public. However, the 30 person gauge will not change right away.

“Places of worship have been places of contamination and viral circulation is still strong in our country. These places will first accommodate 30 people in compliance with health rules, then this gauge will gradually evolve depending on the health situation and the deadline of December 15. It may be a gauge depending on the overall capacity of the place. Discussions are continuing with religious authorities ”, explains Jean Castex.

“Bars and restaurants will remain closed until January 20”, a decision ” necessary “ for Jean Castex who explains that“They remain and will remain places where the virus circulates a lot. Respecting barrier gestures is more difficult there, the length of stay is longer there than elsewhere and they are in closed places, the time of year not allowing the use of terraces ”.

“The gauge is increased to 8 m² per customer. This rule is simple, applies to the total sales area. The gauge is not only applicable to a customer and will be appreciated with common sense. When a couple enters a business, they will count as one person ”, explains the Minister for Small and Medium-Sized Enterprises.

A one-way traffic will be set up “When possible”, hydroalcoholic gel will be made available at the entrance of shops, details Alain Griset. “Traders will be able to extend their opening hours until 9 pm”, he adds.

The Minister of Health Olivier Véran takes the floor. He recalls that the peak of the second wave has been crossed. “At this rate, we could reach our goal of 5,000 cases per day on average by the second week of December”, he said. “Since last week, the number of hospitalizations, the number of admissions to emergency rooms and intensive care units has been falling”, says the minister, “Even if the care load remains very high with an admission to intensive care unit every 6 minutes”.

“We can say that things are better and at all levels. The measures we have taken were and remain effective, necessary, proportionate. The epidemic is not behind us. The second wave is not over, we must not relax our vigilance ”, concludes Olivier Véran.

⇒ 11:10 a.m. [RESTRICTIONS] “It is premature to speak of deconfinement”

Jean Castex recalls that despite the results, the epidemic was still very present. “It is premature to speak of deconfinement. It is essential not to let our guard down ”, he explains, “However, the dynamics observed allow us to move on to a next step in the progressive strategy that we have adopted. It is based on simple principles: we allow the gradual restart of certain activities by surrounding them with rules ”.

The Prime Minister recalls the next steps in reducing containment. On November 28, businesses will be able to reopen. It is from December 15 that the certificate will no longer be necessary to leave your home during the day, but mandatory for any exit during the curfew (from 9 p.m. to 7 a.m.). Finally, “Teleworking remains the rule and must be as massive as possible”, recalls the Prime Minister.

⇒ 11:05 a.m. [ÉPIDÉMIE] “The first results are there and I wanted to congratulate you on them”

Prime Minister Jean Castex begins his press conference by congratulating the French for their efforts. “The first results are there, your efforts are paying off. The epidemic pressure remains strong but it is reducing, in France more than in other European countries. The virus’s reproduction rate is now estimated at 0.65, the level reached during the first containment and today one of the lowest levels in Europe “, he says.

Jean Castex pays tribute to caregivers. “I address them on your behalf a huge thank you for their dedication”, he said.

After Emmanuel Macron’s announcements, the Conference of Bishops of France has ruled the limit of 30 people for participation in religious celebrations ” unrealistic and unworkable “. The president of the CEF Bishop Éric de Moulins-Beaufort expressed his incomprehension to the president. “It emerges [de cet échange téléphonique] that a realistic gauge, while remaining strict, will be defined by Thursday morning ”, said the bishops.

Monday, November 23, religious representatives had suggested much less restrictive conditions to the cabinet of the Ministry of the Interior. They mentioned a surface area of ​​4 m² per devotee, an occupation of churches at one third of their usual capacities and strict respect for barrier gestures (wearing a mask and hydroalcoholic gel).

Emmanuel Macron warned: “It will not be, for sure, Christmas holidays like the others”. Of course, if the health situation allows, confinement will be lifted on December 15 and replaced by a curfew. But the president called for everyone’s responsibility in “Limiting the number of adults in the same room”, and respecting barrier gestures, even at home. An opening of ski resorts for the holidays has been judged ” impossible “ by the head of state, who plans to reopen in January.

However, starting next Saturday, it will be possible to buy Christmas gifts in local shops. The latter will be able to reopen while respecting a strict sanitary protocol that Jean Castex should detail. Economy Minister Bruno Le Maire said he was in favor of opening stores “Every Sunday until Christmas”.

⇒ 10:15 a.m. [PROPOSITION DE LOI] Isolation of the sick soon to be compulsory?

During his speech, Emmanuel Macron wished ” that the government and parliament lay down the conditions to ensure the isolation of infected people, including in a more restrictive manner », Promising support “On the material, health and psychological level “.

The next day, Wednesday 25 November, a bill to take these measures was tabled in the National Assembly by the majority group “Agir Ensemble”. The latter, to make isolation compulsory, wishes to apply a system of penalties and compensation. In the event of non-compliance, the fine would amount to € 1,500.

⇒ 10:00 a.m. [RESTRICTIONS] A reduction in confinement from Saturday

The official lifting of containment is planned for December 15, if the health situation continues to improve and the number of new daily cases remains below 5,000. A curfew will then be put in place from 9 pm to 7 am .