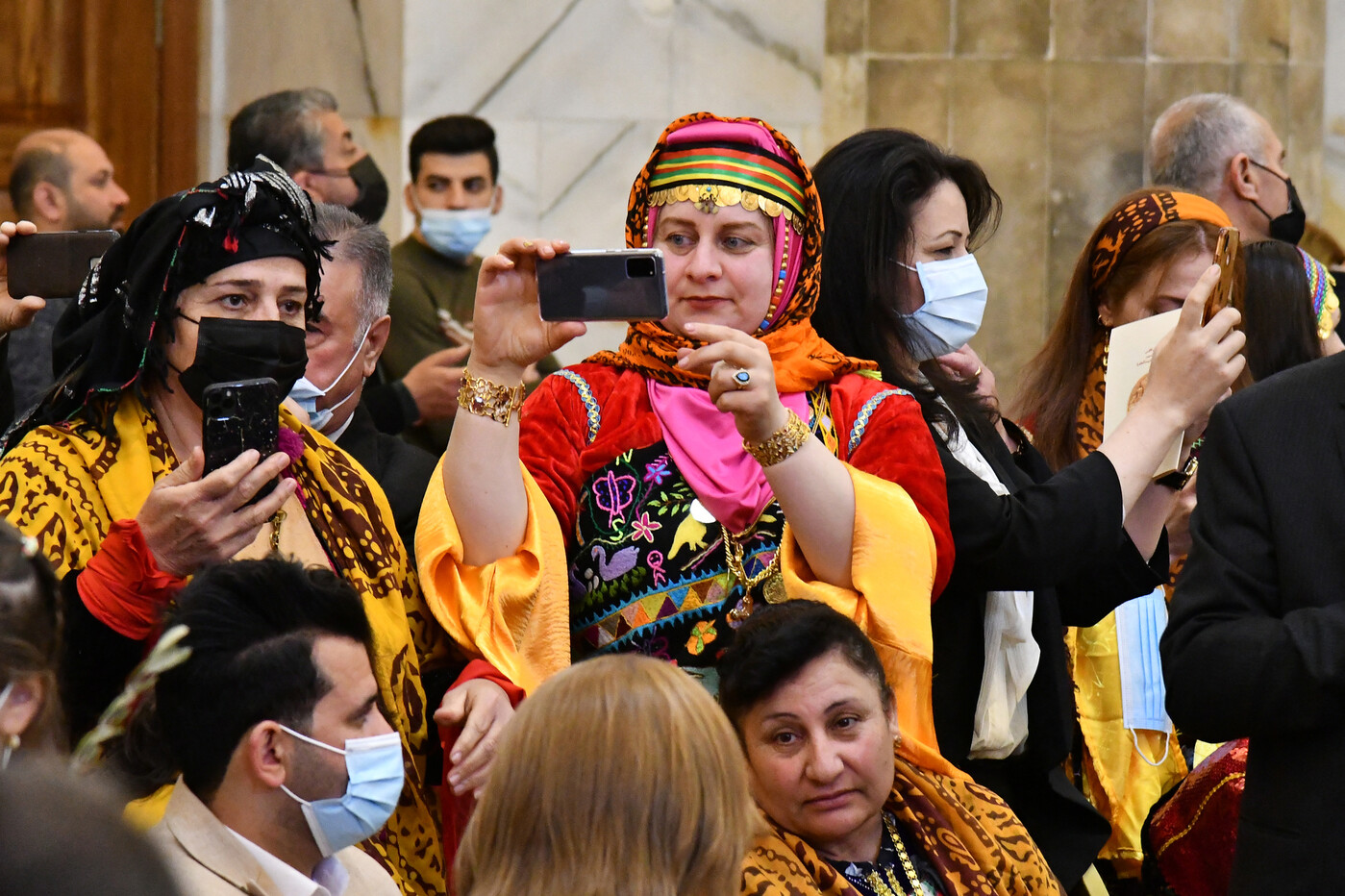 ⇒ 10:30 a.m. [VIDÉO] The Pope arrives at the Church of the Immaculate Conception in Karakoch

To the sound of ululating of joy, Pope Francis entered the Church of the Immaculate Conception in Karakoch. The faithful, many in the church, let their joy explode. Very smiling, Pope Francis does not hide his joy at being present in this city that its Christian inhabitants had to flee in 2014 in the face of the threat of Daesh.

⇒ 10:24 a.m. [AMBIANCE] The people of Karakoch welcome the Pope to their home

The whole town of Karakoch seems to have come together to greet Pope Francis on his journey to the town’s Church of the Immaculate. Escorted by a strong security convoy and numerous bodyguards on foot, the Pope descends the main avenue of the city in his car. Sometimes, he has it stopped to bless children by touching their heads, passing his hand through his window.

“We have been praying for so long for the Pope to come to Karakoch! This visit is a dream come true. The Covid does not scare us, and we will of course go to see it in the streets as we approach the cathedral. This visit will give us a little joy, as life in Karakoch has changed a lot since before Daesh.

Barely half of the inhabitants returned after the departure of the jihadists, like us in 2018, and the streets are much less busy than before. Above all, there is no work and we lack resources. We hope that the Pope’s visit will go smoothly, to show our compatriots in exiles that life continues in Iraq and to encourage them to return to live here. “

The Pope’s helicopter has just landed in Karakoch. The images captured on board a bus by our journalist Loup Besmond de Senneville testify to the large number of Iraqi citizens who have come to watch the arrival of Pope Francis. Karakoch is one of the few predominantly Christian towns in the country.

Bishop Petros Moshe, Syrian-Catholic Archbishop of Mosul and Karakoch: “In the initial program of the trip, Pope Francis was only to go to Baghdad, Ur and Mosul. But I insisted that he also come to Karakoch: to see destroyed churches is good, but here the Church is alive! Our religious buildings, as well as our houses, have been repaired thanks to NGOs and donations from the faithful, even though the Iraqi government has helped us a little.

If the Pope is well received this weekend, it will prove that it is still possible to live and work together in Iraq. As for Mosul, Christians are still reluctant to relocate there: only 50 to 70 families have returned there since the departure of Daesh in 2016, out of nearly 6,000 at the beginning of the 2000s. This will be done little by little. .

The Pope has just led a prayer for the victims of the war from Church Square in Mosul. Francis was surrounded by two crosses, one made of beams emerging from the ruins of the city and the other offered by a Muslim sculptor, as a sign of solidarity with the Christians.

“{Lord]nWe entrust to you the many victims of the hatred of man against man, we invoke your forgiveness and we implore the grace of conversion “, did he declare.

It is only by putting into practice the “A plan of love, peace and reconciliation (…) that this city and this country can be rebuilt and that hearts torn by pain can be healed”. The Pope also prayed “For all those who have harmed their brothers and their sisters: may they repent, touched by the power of your mercy”.

“How cruel that this country, cradle of civilizations, has been hit by such an inhuman storm, with ancient places of worship destroyed and thousands and thousands of people – Muslims, Christians, Yazidis, who were cruelly wiped out. by terrorism, and others – forcibly displaced or killed!, lamented Pope Francis, just before leading a prayer for the victims of the war. Despite everything, we reaffirm our conviction that fraternity is stronger than fratricide, that hope is stronger than death, that peace is stronger than war. “

Omar Al Taweel, a 31-year-old Muslim engineer, who is overseeing the reconstruction by Unesco of the former Dominican convent in Mosul:

“Everyone in Mosul is delighted with Pope Francis’ visit: he will bring a message of peace to our city, still very marked by the Daesh years. Even though the damage is enormous, Mosul is doing better. I tell my Christian friends to convince them to come back, but for the moment they prefer to stay in Kurdistan, in the Nineveh Plain or abroad. It must be said that many basic services are still lacking: health, education… The absence of Christians pains me. I wish we could live together, like before. “

After a helicopter ride, Pope Francis has just arrived in Mosul. Second city of Iraq, historically with a significant Christian minority, Mosul was the “capital” of Daesh from its capture in the summer of 2014 until its takeover in 2017.

It was in a mosque in the city that Abu Bakr al-Baghdadi proclaimed himself caliph. The city was badly damaged by the fighting, partly in its old part. This is where Pope Francis is to say a prayer for the victims of war.

The Pope is due to arrive in Mosul in the morning to celebrate a prayer in homage to the victims of the war. François seems eagerly awaited by Iraqi youth, as evidenced by the tweet of Father Olivier Poquillon, a priest living in Iraq.

While this interview was not on the official program, Pope Francis met at the airport with Erbil Massoud Barzani. The latter was president of Iraqi Kurdistan from 2005 to 2017 and is a leader of the country’s Kurds.

⇒ 7 h 35 [PROGRAMME] What are the stages of this threeth dayPope François in Iraq ?

After spending a night in Baghdad, Pope Francis went, this Sunday morning, to Erbil where he was welcomed by the civil and religious authorities of the autonomous region of Iraqi Kurdistan. He must then reach Mosul by military helicopter, a city in full reconstruction after having been one of Daesh’s strongholds. François will preside over a prayer for the victims of the war.

This dense morning will continue in Karakoch, one of the few predominantly Christian towns in the country. The Pope will celebrate the Angelus in the Church of the Immaculate Conception and will also go to meet the inhabitants.

In the afternoon, the Holy Father will celebrate a mass in Erbil, in the Franso Hariri stadium. Designed to accommodate nearly 28,000 spectators, this stadium should be the meeting place between the Pope and the crowd. François will finally return to Baghdad, before taking his plane back to Rome on Monday morning.

On his second day in Iraq, Pope Francis met Grand Ayatollah Ali Al Sistani, one of the most important figures in the Shiite world, in Najaf. Between the two men, “The discussion revolved around the great challenges facing humanity, the role of faith in Almighty God, his messages, and high moral values ​​to overcome them”, said in a statement from the Nadjaf marjaiyya – the religious institution surrounding Ali Al Sistani.

François then exchanged with representatives of different religions in Nassiriya. A meeting that took place near the ancient site of Ur, in southern Iraq, considered to be the homeland of Abraham. In a very strong speech, the Pope called to preserve brotherhood and to “To hope against all hope”.

The day on Saturday ended with a mass of the Holy Father in the Chaldean Cathedral of Saint Joseph, in Baghdad. The President of the Republic of Iraq, Barham Salih, as well as several other ministers participated in the ceremony.