The red flag flies over the automobile. Hong Qi (“Red flag” in Mandarin), the high-end brand of the Chinese manufacturer FAW, is no longer just that of the dignitaries of the most populous country in the world. It is now also that of Xi Jingping during his official trips abroad. Until now, he used the cars of the host country.

In 2014, it was in a Citroën C6 that he went to the Elysée, with his wife for a gala dinner with François Hollande and his partner. We have also seen it all over the world in Mercedes-Benz limousines, the favorite brand of heads of state. But this is all a thing of the past. Today Xi is riding in Hong Qi.

Last September, the Chinese presidential couple visited Emmanuel and Brigitte Macron in a state-of-the-art limousine of this brand, an N 501. Xi wants to ensure his safety in a model designed especially for him. No need to have bodyguards run next to his car, like during his tour of South America!

The beast and the giantess

Donald Trump is carrying in his luggage, or rather in one of his Boeing, his personalized Cadillac, “the Beast” (the beast). Xi Jingping no longer travels without his Hong Qi N 501. You could call her “the Giant” as she is so impressive.

It is an elongated and ultra-secure version of the H7, a limousine which would be based, according to specialists, on an Audi A6L platform and equipped with a Toyota V8 engine of 4 liters and 400 horsepower. FAW’s partnerships with Volkswagen (which owns Audi) and Toyota make this information almost certain, but everything is conditional, the Chinese brand not giving any information on this 5.5-meter monster. 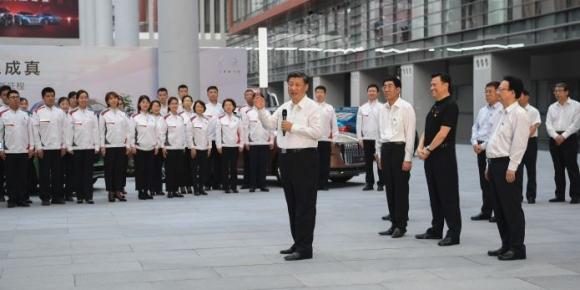 Xi Jingping visiting a Hong Qi factory in China in 2018

Driving Chinese is also a matter of national pride for Xi. The president of the second largest economy wants to show that his country knows how to make luxury cars. It even offers them to the leaders of “friendly” countries, such as Alexander Loukachenko, sinister President of Belarus whose re-election the European Union denounced on August 10. And when Vladimir Putin struts in front of an Aurus, Russia’s new billionaire brand, his friend Xi Jingping smiles, admires the big toy, but knows that his Hong Qis have a market to take in the East and Africa. 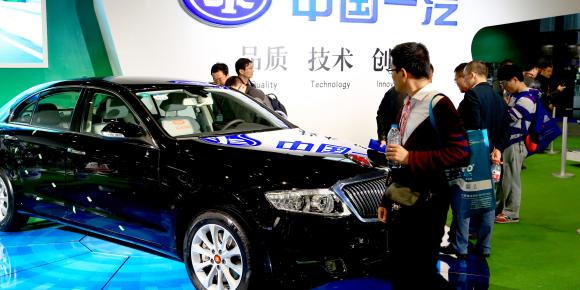 Created in 1957 at the request of the Chinese Communist Party, Hong Hi has for decades declined its models of limousines perfect for military parades and domestic travel of Mao Zedong and his successors.

In 1972, everything changed. This old-fashioned car is making headlines around the world. In the midst of the Cold War, the President of the United States Richard Nixon left for China to meet Mao Zedong! A whole cohort of Hong Qi carries the American delegation. But little by little the brand died out. 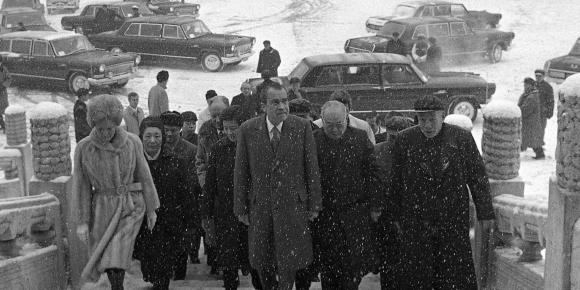 The President of the United States Richard Nixon and his wife Pat visiting the Forbidden City in Beijing on February 25, 1972. In the background, waiting for Hong Qi

It was reborn in 2010 and made a marked comeback in 2015, at the Shanghai Auto Show. The Hong Qi booth looks back on the arrival of Nixon, with the photo above in large format and a model from the time, a way of recalling the historic anchoring of the brand. A year earlier, on a trip abroad, Xi had taken his Chinese car with him. It will return thereafter to the “locals”, like the Citroën, then will resume its own. Because the sinization of the luxury car fleet is now underway.

Haro on Ferrari and Rolls-Royce! In 2016, taxes on foreign luxury cars increase and Chinese dignitaries are encouraged to ride Chinese. In 2018, for a tour of Africa, Xi takes his own vehicle again. There will be no going back. In Hong Qi N 501 or H7 in China and abroad, in model L5 with four microphones for parades, Xi rolls placidly to conquer the world.