Pope’s trip to Iraq: Qaraqosh, in search of lost lightness 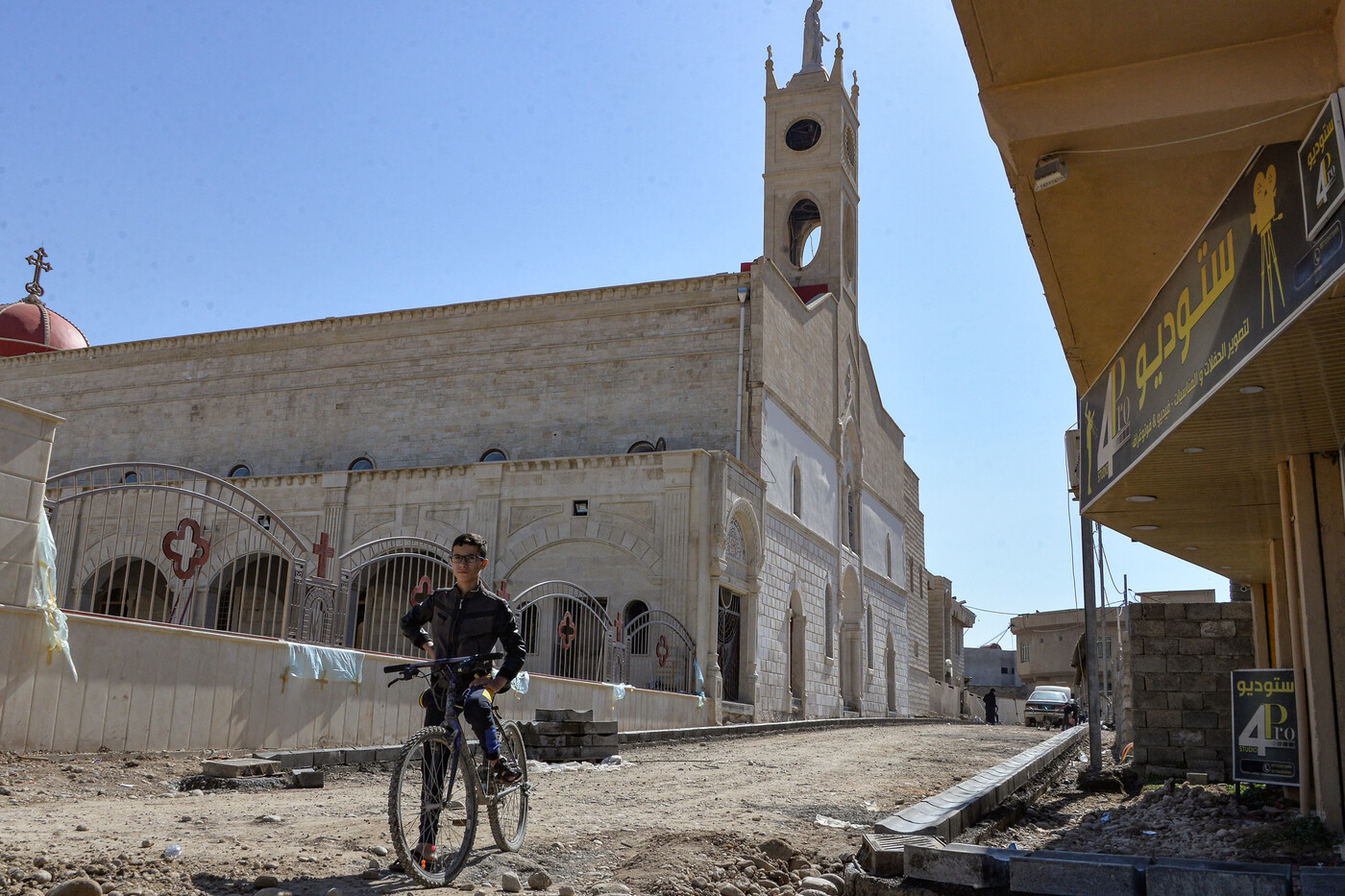 Pope’s trip to Iraq: Qaraqosh, in search of lost lightness

In a cloud of dust and a thunderous sound, the Qaraqosh causeway is getting a makeover. Jackhammers are out this early March morning for ambitious road works around the al-Tahira Cathedral (of the Immaculate Conception). It is in this emblematic building on the Nineveh Plain, which served as a shooting school for Daesh jihadists, that Pope Francis will pray to the Angelus on Sunday March 7 at noon, before ending his Iraqi journey in the Kurdish metropolis of ‘Erbil.

The dozens of men who are busy around Qaraqosh Cathedral with their construction tools are none other than “Returned”. Hear from Christians who, after the withdrawal of Daesh in the fall of 2016, gradually returned to live in this village in the south-east of Mosul, in a desolate landscape of burnt houses and vandalized churches – since then partly rebuilt thanks to donations from churches and humanitarian organizations. The “Returned” would be around 25,000, or half of the 50,000 inhabitants before Daesh.

→ EXPLANATION. How many Christians are left in Iraq?

Then populated 90% of Christians (mostly Syriac Catholics), Qaraqosh was the first Christian city in Iraq. According to its inhabitants, a wind of lightness floated on this “Little Paris” where the streets often did not empty until late in the evening. Until that terrible night of August 6, 2014, when the terrified population fled in the face of the advance of the Islamic State, which had already made Mosul its Iraqi capital less than two months earlier.

Many Christian inhabitants, who most often left for neighboring Kurdistan, but also for foreign countries including France, have not forgiven the Kurdish peshmerga for having “Let go” Qaraqosh, that they were nevertheless “Supposed to protect”… Other observers qualify this speech by specifying that the local Christian militias also participated in the stampede.

→ ANALYSIS. Pope’s trip to Iraq: Erbil, pole of stability in a bloodless country

In any case, when the Iraqi (mostly Shiite) army retook the city on October 22, 2016, the Christian armed group UPPN (Nineveh Plain Protection Units) took part in its liberation. Founded at the end of 2014 to provide Christians with their own military force, the UPPN are made up mostly of natives of Qaraqosh. Dreaming of self-determination for the Nineveh Plain, some of these men would have liked to see the UPPN eventually become the regular army of an autonomous Christian region.

Five years later, it is clear that this is not the case: the plain of Nineveh, teeming with soldiers and dotted with checkpoints, is today occupied by both the Kurdish army and the army. Iraqi federal government, who for decades have been fighting mercilessly for these “Disputed territories”. It is the federal forces which control Qaraqosh, moreover surrounded by pro-Iranian Shiite militias which proliferate in the region, raising the concern of the Christians.

“Our neighbors looted our houses”

Although largely in the majority, they are not alone in Qaraqosh. In addition to a few chabaks (a Muslim minority with mainly Shiite references), the city is said to be home to around 200 Sunni families, orbiting the city’s only mosque – against a dozen churches. But relations between communities, already distant before the Islamic State, now seem reduced to the strict minimum: many Christians do not hide their mistrust vis-à-vis their Sunni neighbors, some of whom have sided with Daesh and “Looted our homes in our absence”.

There is little doubt that even though Qaraqosh is far less dilapidated than Mosul, pounded by international coalition airstrikes and fighting between Daesh and the Iraqi army, the carelessness of the past is no longer. The imminence of the papal visit, however, seems to give the town, already adorned with posters bearing the effigy of Francis, a new lease of life.

→ MAINTENANCE. Cardinal Sako: “I want to believe that the Pope’s trip will be a new stage in the history of Iraq”

This is what hope two neighbors crossed in front of their houses in the city center, retyped with the means at hand after their return in 2017. “Before, in this street, there were always children playing, but everyone left”, Majoda sighs. “This weekend, when the Pope is here, we’ll be outside again! “ the Elisabeth cut, a few years younger. Like many Iraqis, this mother hopes that the Pope’s visit will go smoothly, to send to her compatriots “A safety message” : in other words, encourage them to return home.