TESTIMONIALS. Belarus: exiles far from their country, opponents of President Lukashenko “terrified” since the arrest of Roman Protassevich 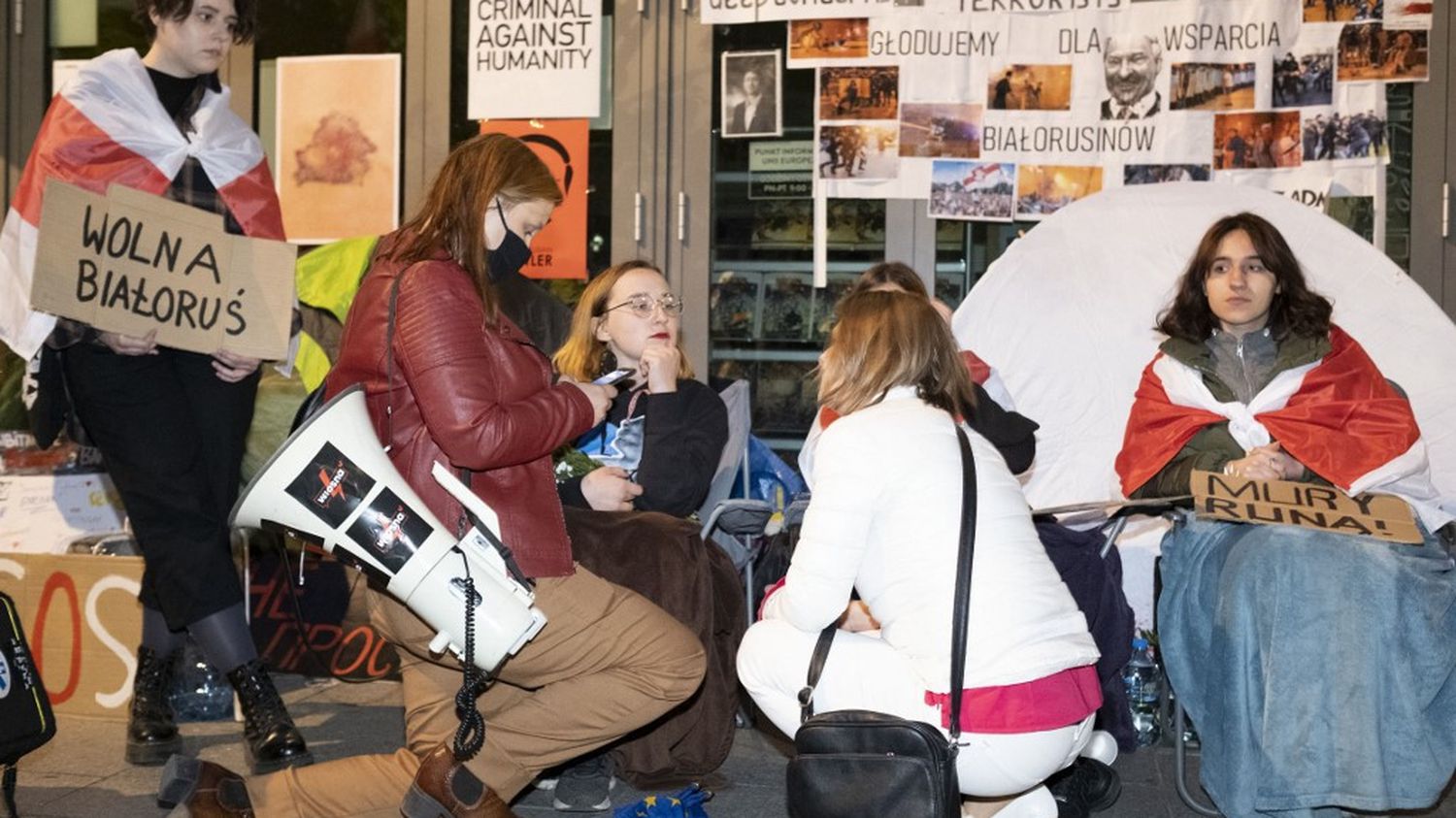 TESTIMONIALS. Belarus: exiles far from their country, opponents of President Lukashenko “terrified” since the arrest of Roman Protassevich

The Belarusian exiles already knew they were under constant surveillance. They were afraid for their safety, but this feeling has strengthened and since the arrest of Roman Protassevich on Sunday May 23, they fear for their lives. According to them, the hijacking of the Ryanair flight from Athens to Vilnius to arrest this 26-year-old journalist constitutes a turning point in President Alexander Lukashenko’s strategy against his opponents. “The message is clear: ‘No matter where you are, we will fight you.’ Lukashenko wants to show that anyone who supports the protests and the opposition is not safe. Whether they are an activist, journalist or human rights defender “, analysis Oleg Kozlovsky, researcher for Eastern Europe and Central Asia for Amnesty International.

Reached by phone, journalist Bella Fox, a refugee in Vilnius (Lithuania) since last November, does not hide her nervousness: “Until now, I felt pretty safe. But now I tell myself that at any time the police can come and get me, government officials have made explicit threats against opponents. It’s terrifying. . “ The young woman is all the more traumatized because she was kidnapped in October by the KGB – the Belarusian secret services – then held in prison for ten days before being released. She was then working for the Belarusian Press Club, a platform for media development and independent Belarusian journalists. “When I returned, the police came to ring at my house and at my neighbors, asking if they had seen me recently. I then received a letter asking me to go to the nearest court to my house, in Minsk. I understood that I was going to be arrested again “, she tells franceinfo. Her colleagues then advised her to leave the country, which she did on November 5. A few days later, his colleagues were all arrested. “They have been in prison for seven months and await trial. They face up to five years in prison. I am relieved to be gone on time.”, she confides, her voice trembling.

As Bella fox, many opponents have found refuge in neighboring countries. Because after the highly contested re-election of President Lukashenko on August 9, 2020, Belarus was shaken by an unprecedented movement of demonstrations. In the face of violent government repression, thousands of protesters were arrested and many more had to flee the country, leading to a wave of exiles for safety or because they “saw no possibility for their future in Belarus”, Oleg Kozlovsky analysis. According to him, two types of opponents are particularly targeted by the government: on the one hand there are all those connected to the main opponent, Svetlana Tikhanovskaïa, “and in particular his close advisers”. On the other hand, all bloggers and journalists. He quotes in particular Stepan Putilo, young founder of the opposition Telegram channel Nexta, whose name appears at the top of the list of “individuals involved in terrorist activities”, alongside that of Roman Protassevich, the former editor-in-chief of this influential media. Both face life imprisonment.

Christophe Deloire, Secretary General of Reporters Without Borders (RSF), expresses his concern. “There is a whole generation of young journalists very targeted by the government, with an amplification of the repression in recent days. More than twenty journalists are currently in detention in Belarus”. He recounts his meeting on Wednesday with a group of five young Belarusian journalists in exile in Vilnius. All say to each other “terrified” since the arrest of Roman Protassevich. “Until now, they felt safe. Now they are starting to tell themselves that anything is possible, that the government can come and get them at any time.”. The NGO lodged a complaint in Lithuania against the Belarusian president for “embezzlement for terrorist purposes”.

If the anxiety is palpable, the opponents questioned by Franceinfo are not surprised by the spectacular operation of the Lukashenko government. “I was very shocked but unfortunately I found it logical on their part. At the beginning of May, the Minister of Home Affairs declared on television that the government would find all the opponents outside the country and apply the same methods than those applied by the United States against Bin Laden. That is to say, suppress us “, relates Alice Syrakvash, co-president of the Belarus association in France. She had to leave her country seventeen years ago, threatened for having denounced fraud in her capacity as an independent observer of the 2001 presidential elections. For her, the fact that the president is intervening directly against one of her opponents shows that he fears his influence. “It is reassuring, because it means that our action is effective and at the same time, it is very scary”.

Aleś Zarembiuk, 38, was also forced to flee the repression of the authorities who did not appreciate his running in local elections in the west of the country ten years ago. From Warsaw (Poland), another bastion of dissidents, he founded the Belarusian House association, whose mission is to organize concerts, exhibitions and to create links within the Belarusian diaspora. But since August 2020, the association deals exclusively with repressed opponents. For him, this about-face of Lukashenko is not surprising. “This dictator has no limits. He is totally unpredictable. I wouldn’t have been surprised if he had ordered the plane to be shot down if the pilots refused to land.”

For a long time, the strategy of the autocratic president has been to force his opponents into forced exile by literally pushing them out of the country. The police have a habit of locking them in cars and then driving them to the border, forcing them to cross it, on pain of imprisonment. Last September, Maria Kolesnikova, one of the figures of the protest, was arrested in the middle of the street by masked men and then taken by force to the border with Ukraine. She managed to extricate herself from the car she was being held in and tore up her passport so as not to be deported. Since then, she has been charged with “conspiracy to seize power by unconstitutional means” and “creation and management of an extremist formation”, according to The world, and risks up to twelve years in prison.

But now the Belarusian government seems to have changed its mind. “The authorities understood that they had to stop pushing everyone out. They left a growing community in exile. However, even from abroad, this one continues its work of collecting and disseminating information and encourages the civilians who remained in Belarus to continue their peaceful struggle against power “, decrypts Oleg Kozlovsky. According to him, the government understood that it was going to be very difficult to stop these exiles and that it should therefore stop putting the protesters out. “I’m afraid this is the start of a new era of repression that will cross borders”, worries Oleg Kozlovsky.

So far, Polish and Lithuanian police services have provided protection to opponents. The offices of the association managed by Aleś Zarembiuk are thus monitored “24 hours a day, seven days a week” since August by the Polish police. Oleg Kozlovsky underlines that several journalists and activists do benefit from protection from these states. “But not all. Their safety is therefore not guaranteed., especially since the Belarusian secret services are heavily present in Lithuania and Poland, supported by the Russians “, adds the researcher from Amnesty International. Aleś Zarembiuk thus ensures that he is constantly “monitoring” in the different cities of Poland where he travels with his colleagues. “In March my phone was hacked. In April they tried to hack our emails, one of our coworkers received several thousand threats in the past five days, including this one: ‘We’re going to shoot you in Warsaw ‘”, he explains.

“They should be able to benefit from state protection by helping them change their names or their jobs.”

For journalist Bella Fox, the most targeted opponents should be able to benefit from a bodyguard, “at least until the situation calms down”. She is particularly worried about the teams of Svetlana Tikhanovskaya and Alexei Navalny, both based in Vilnius. “The KGB (Belarusian intelligence services) and the FSB (its Russian counterpart) could easily kidnap them because they are very close to the border. Technically, it is possible. De facto, it has never happened yet.” She underlines that many exiles have requested political asylum or are preparing to do so. “This is their ultimate means of protection. I am also considering making this request on my own.” Christophe Deloire calls for help Belarusian journalists “to leave the country more easily by allowing them to have visas”. According to the spokesperson for RSF, Europe must think about “a great support plan including the question of their protection, to allow them to train and work, sheltered from external pressures”.

So far, the European Union has stuck to financial sanctions. It froze the assets of more than 50 leaders of the country, including President Lukashenko, several ministers and police officials. So many people who are also banned from staying in the EU. There were also symbolic gestures, such as the award of the 2020 Sakharov Prize to the Belarusian opposition.

According to the leader of the opposition, Svetlana Tikhanovskaia, the international community must further tighten the sanctions against President Lukashenko’s regime. “Urgent action is needed. We must not waste time, because this escalation in oppression in Belarus is the result of impunity and we have fled this impunity, she judges. Europe must isolate Lukashenko politically. We must no longer speak to him, we must speak to other representatives of Belarus and in particular to those of civil and democratic society “.

The European Track Cycling Championships, normally scheduled for June 23-27 in Minsk, have also just been canceled. With several members of the diaspora, it had been two months since Anna *, an opponent exiled in France who prefers to remain anonymous, put pressure on the Ministry of Sports and on the Cycling Federation to reach this decision. She considers this late cancellation: “It took a hijacking for the government to understand the gravity of the situation. It is sad and worrying“, she laments to franceinfo.

For the one who presents herself as a representative of the Belarusian community, it would take sanctions “very hard” and directly attack the country’s economy at its source, banning all imports. “There are three strategic sectors: chemicals, wood and fertilizers for plants. These goods allow Lukashenko to finance his police and his army. The day he can no longer pay them, they will let him go.”, she assures.

* The first name has been changed.