The year 2020 is one of the three hottest on record 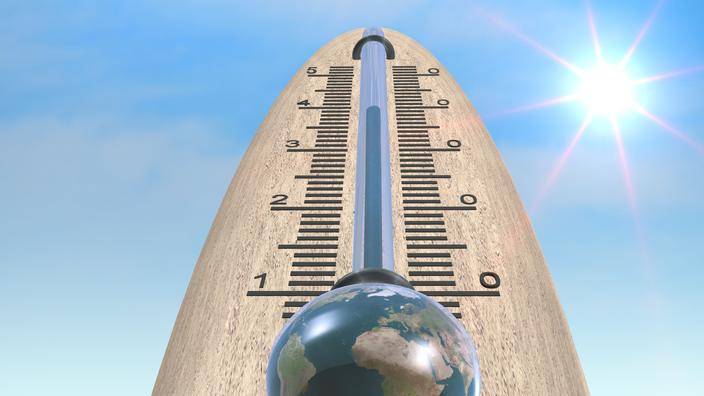 The year 2020 is one of the three hottest on record

According to the World Meteorological Organization, 2020 is neck and neck with 2016 to win the record since the start of the industrial age.

At 14.9 ° C on average in 2020, the average temperature at the Earth’s surface has been up 1.2 ° C compared to the pre-industrial era, the World Meteorological Organization (WMO) said Thursday, United Nations Meteorological Agency. Last year ranks among the three hottest on record, neck and neck with 2016 and 2019.

In addition, based on estimates from the British Meteorological Forecast Service (Met Office), the WMO points out that there is a 20% risk that the average increase in the planet’s temperature will temporarily exceed an increase. 1.5 ° C compared to the pre-industrial era by 2024, the minimum threshold for warming set in the Paris climate agreement.

According to the Goddard Institute for Space Studies at NASA and the European Copernicus Climate Change Service, 2020 is even the hottest year measured, on par with 2016, since measurements began. However, the NOAA (US Oceanic and Atmospheric Administration) and British estimates, notably those from East Anglia University, place it in second place, after 2016. Finally, data from the Japanese meteorological service places 2020 at third place, specifies the WMO which underlines that all these estimates fit in a pocket handkerchief, because of the margins of error.

Anyway, at the end of 2020, the La Niña climatic phenomenon, which tends to cool surface waters in the eastern Pacific and leads to a slight decrease in the average temperature of the planet, began. This recurring event, which continues this year, has the opposite effect on the average temperature of the planet at El Niño, which had contributed to the record warming of 2016. As a result, “It is obvious that human induced climate change is now as powerful as the force of nature”, said Petteri Taalas, Secretary General of WMO.

Faced with these results, “We are already witnessing unprecedented extreme weather phenomena in all regions and on all continents,, said UN Secretary General Antonio Guterres. We are heading towards a catastrophic temperature rise of 3 to 5 ° C during the XXIe century. Making peace with nature is the great mission of our century. It must be the absolute priority of everyone, everywhere in the world ”.

While the Covid-19 pandemic has caused lockdowns of varying lengths across the planet and unusual reductions in emissions in transport, energy production and industry, this has not affected temperatures. No wonder: the climatic machine is like a locomotive at full power on a descent. Its inertia is very great and it is very difficult to slow it down …

50% increase in CO2 in the atmosphere

In fact, in 2021, concentrations of greenhouse gases will continue to increase in the atmosphere. According to the Met Office, the average concentration of carbon dioxide (CO2) is expected to reach a record 417 ppm (parts per million molecules in the air), for several weeks between April and June 2021, at the Mauna Loa observatory , Hawaii. This record would represent a 50% increase in the concentration of CO2 in the air since the start of the industrial era. And even if La Nina contributes to better absorption of carbon dioxide by cooling surface water, that will not be enough to compensate for this increase, far from it.