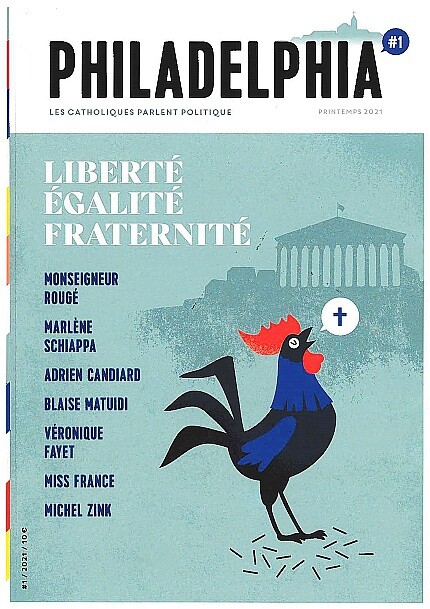 At the beginning of Philadelphia, there is a think tank (a “think tank”) created within the diocese of Nanterre (Hauts-de-Seine) to reflect on major current issues. Why not bring the fruits of this work to as many people as possible? Thus was born the “mook”, this annual review, rather chic and sober in its presentation, which deals with a theme out of a total of 112 color pages, ventilated, illustrated, dynamic.

“We have the intuition that the word of Christians is addressed to the universal”, explains Father Bertrand Auville, parish priest of Vanves and advisor to elected officials of Hauts-de-Seine. The initiative received the support of the Bishop of Nanterre, Mgr Matthieu Rougé, and material assistance from the Sainte-Geneviève Foundation, while Éditions Première partie – already editor of Limit as well as Jesus! – participate in this co-edition.

At the heart of this first issue of Philadelphia is the Republican motto – the name refers to “the love of the brothers.” Freedom, equality, fraternity: Bertrand Auville, in his editorial, regrets the weakening of the formula: “These words ring hollow. They have been erected as a slogan, they have been emptied of their meaning. “ On reading the review, the personal, but also collective and political meaning of the motto regains its richness, thanks to a cast as eclectic as it is impressive: footballer Blaise Matuidi, Dominican Adrien Candiard, Véronique Fayet, president of Secours Catholique , when it is not Victor Hugo and Charles Peguy, Madeleine Daniélou or Marlène Schiappa.