Véran, Raoult, Castex … The personalities revealed by the Covid-19 crisis 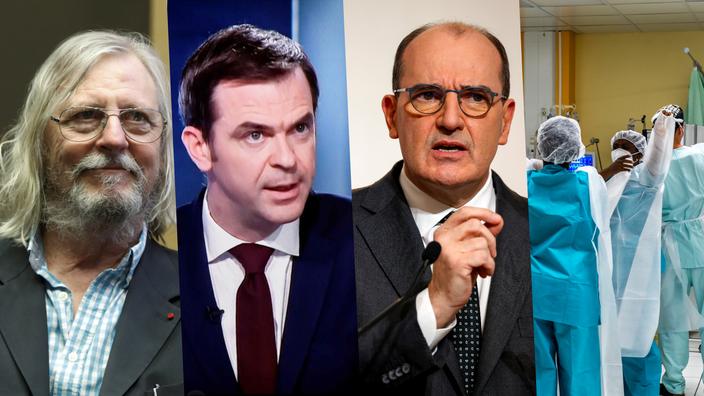 Véran, Raoult, Castex … The personalities revealed by the Covid-19 crisis

This year 2020 was deeply marked by the coronavirus epidemic. The health crisis has thrown on the front of the stage personalities hitherto unknown or even unknown.

2020 will remain marked with the seal of the Covid-19 epidemic, as 165 remained the year of the Antonine Plague, or 1347 that of the Black Death. In France, the coronavirus has shone the media light on personalities hitherto little known to the general public.

Every evening at 8 p.m., during the first confinement, the French applauded them at their windows. Faced with the violence of the health crisis which overwhelmed hospitals, the commitment of the nursing staff was welcomed by all.

Read also :Public hospitals ask Castex for a salary increase for the “forgotten people of Ségur”

If the pandemic has not revealed its existence, it has shed light on the old claims of this professional body, which, for years, has been calling for more resources, more recognition. Endlessly repeating that applauding was not enough, the profession continued to mobilize to demand more efforts from the government. The State has invested nearly 3.5 billion euros in the cash flow of hospitals, and the Ségur de la Santé has released more than 8 billion euros in order to revalue salaries.

Unknown to the general public until his appointment in February 2020 as Minister of Health, he has become a key figure in French political life. This Grenoble doctor, a former socialist who joined La République en Marche in 2017, was first praised for his clarity, reassuring in these times of uncertainty.

Critics against the management of the crisis, stocks of masks and tests combined with unpopular health measures have however earned him the disenchantment of many French people. Olivier Véran has become the man of restrictions, announcing in front of his slides the zones “red“And”green», Specifying the prohibitions announced by the President of the Republic or the Prime Minister.

Jean-François Delfraissy is the head of the Scientific Council, the body created by Emmanuel Macron to advise him in the fight against the epidemic.

Described as a man of consensus, he does not fail to arouse criticism. He is notably accused of having gathered his friends within the Scientific Council. Didier Raoult, the controversial epidemiologist from Marseille, slammed the door of the council for this reason, and, at Figaro, a relative of this body described it as a “advice from friends who discuss for hours, cut their hair in ten, write reports that are too long and in bad French“.

He was the voice of the epidemic during the first weeks of the health crisis. Every evening, Jérôme Salomon meticulously reported on the pandemic figures, thus ensuring the “transparency»Wanted by Emmanuel Macron, every evening at 7 pm during his press briefing. The Director General of Health (DGS) has since given only two press conferences in December, and two more in November.

Jérôme Salomon is “indestructible», Confided a member of the government Figaro. However, the Senate commission of inquiry accused him in early December of having lobbied well before the onset of the health crisis (in February 2019), to modify a report recommending the purchase of a billion masks in the event of a pandemic. .

But Jérôme Salomon is close to the president. He had joined his campaign team early on to deal with health issues. This professor of medicine presents an impressive CV, as much in hospital, in research institute or in ministerial office. An asset for this highly political position, directly connected to the Élysée. For William Dab, DGS between 2003 and 2005, “Jérôme Salomon is undoubtedly the most competent person to fill the position”.

No personality of the year 2020 can claim to have hit the headlines like him at this point. An eminent infectious disease specialist at the head of the Marseille University Hospital Institute, the professor adopted an iconoclastic position within the medical profession in February, defending a simple remedy for the virus: hydroxychloroquine.

His strong opinions, his contempt for the media and his condescension have aroused strong opposition from his colleagues in infectious diseases. But his counter-current speeches and his diatribes against the pharmaceutical groups ended up making him the idol of a fringe of the population skeptical about government action, even openly conspiratorial.

The epidemiologist has not stopped defending controversial positions, asserting very early that there would be no “second waveOr more recently confessing on CNews his skepticism about the vaccine. On April 10, Emmanuel Macron visited him in Marseille. He was also heard by the committees of inquiry on the management of the epidemic crisis by the committees of the National Assembly and the Senate.

Renowned infectious disease specialist Christian Perronne is the other controversial medical figure of the year. The head of the infectious and tropical diseases department at the Raymond-Poincaré hospital in Garches (Hauts-de-Seine) was dismissed from his post on December 17, 2020. He had “made statements considered unworthy of the function he performs “, according to the press release from public assistance hospitals in Paris (AP-HP).

Read also :Christian Perronne, the infectious disease specialist in the sights of the health authorities

Fervent support of Didier Raoult, Christian Perronne is involved in all controversies. In the summer of 2020, he published a pamphlet, Was there a mistake they didn’t make ?, sold more than 100,000 copies. In his book, the media doctor denounces a “state lie” and the “intensive lobbying of laboratories“. Dr Perronne wins favor with conspiracy circles, so he appears in controversial documentary Hold-up . At Figaro Magazine, he criticized a June “dogmatismOf the French State.

His name is now widely known to the public. When he became Prime Minister on July 3, 2020, Jean Castex was, however, almost unknown. This former local elected representative, The Republicans, however, piloted the deconfinement for the government.

Described as the choice of “efficiency and conviction»By the Élysée, the mayor of Prades (Pyrénées-Atlantiques) has the reputation of being close to the field, and then aroused praise from both right and left.

Only the “Quite new collection of annoyances” (in his words), transformed the “Mr. deconfinement” in “Mr. reconfinementAnd the unpopular measures quickly got the better of his popularity. As such, it plays its role of lightning rod for the President of the Republic: “With Castex as super coordinator, stronger ministers, shields protect the president more», Analyzed for the Figaro someone close to the president.

Ugur Sahin and Özlem Türeci are a German couple, of Turkish origin, and they are at the origin of the vaccine which is now administered in France. Ugur Sahin is general manager of the German laboratory BioNTech, his wife Özlem Türeci is the medical director.

Read also :Ugur Sahin and Özlem Tureci, the Curias of the Covid

Today, the couple is a model of German success, and successful integration. But quickly, Ugur Sahin and Özlem Türeci refused to act as surety in a debate on immigration across the Rhine. “I am an accidental example of someone with an immigrant background. I could just as well have been German or Spanish ”, he explained to Guardian.

Described as “incredibly smart“, or “awesome researchers“, The two researchers have quadrupled their fortune in the space of a year. It was valued at the beginning of October at 2.4 billion euros by the Welt am Sonntag, propelling them among the hundred richest Germans.