“We learned from the first wave”: transfers of Covid-19 patients have resumed to relieve congestion in intensive care services 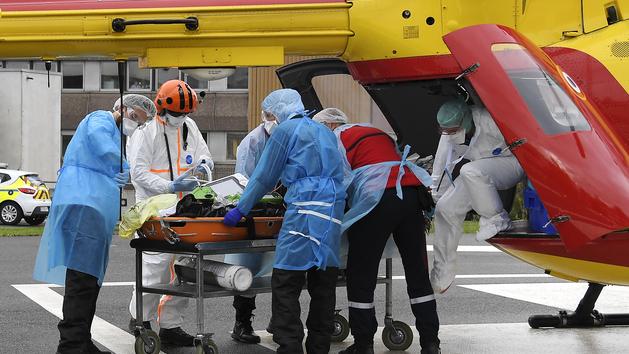 “We learned from the first wave”: transfers of Covid-19 patients have resumed to relieve congestion in intensive care services


“There is a need to transfer patients across the country by air», Declared Olivier Véran Monday, November 16 at the Lyon-Bron airport, where he had come to attend the evacuation of two patients from a Lyon hospital to an establishment in La Rochelle. For the Minister of Health, these evacuations are necessary because “health pressure is so high in certain regions, such as Auvergne-Rhône-Alpes, but not only“. He recongnizes “that it is an extremely complex mechanism that puts all the teams in tension», After having spoken with the teams of Samu and the Lyonnais hospital Édouard Herriot.

142 patients transferred since the end of October

Strasbourg, Blois, Tours, Brive, Corrèze and even Paris have sometimes for the first time received patients with Covid-19 from Chambéry, Dijon, Lyon where the intensive care services are saturated. Indeed, according to the last weekly report from Public Health France, dating from November 12, the regions with the highest hospitalization rate are Auvergne-Rhône-Alpes, Bourgogne-Franche-Comté, Provence-Alpes. -Côte d’Azur, Hauts-de-France and Île-de-France.

But two other additional regions worry scientists: the Grand-Est and the Pays de la Loire. In one week, hospital services saw a 30% increase in Covid patients.

Nationally, 142 patients were transferred between October 23 and November 13, according to the Directorate General of Health, interviewed by Le Figaro. A figure for the moment lower than that communicated by the Ministry of Health last May. Between March 18 and April 1, 344 people were transported to other hospital services mainly by planes, helicopters or trains chartered by the SNCF.

The Grand-Est, Île-de-France and Bourgogne-Franche-Comté were, last March, the regions that benefited the most from this system to relieve congestion in intensive care services. Unlike the second wave, hospitals in the Auvergne-Rhône-Alpes region have since October 23 sent 102 patients to other hospitals.

“The transfers that we have been making since mid-October are different from the first wave», Traces the regional health agency (ARS) of Auvergne-Rhône-Alpes. Unlike March, this time the transfers are made “to anticipate and prevent saturation“. The hospitals in the region, Saint-Etienne, Lyon, Grenoble and Clermont-Ferrand, have opened 1,250 beds against 560 in normal times to accommodate patients from the second wave. Saturation, the necessary mobilization of staff, the reception of non-Covid patients have been anticipated, confirms the ARS Auvergne-Rhône-Alpes.

An organization shared by Professor Bertrand Souweine, head of the intensive medicine and intensive care unit at the Clermont-Ferrand University Hospital. “The first time, the evacuations were carried out in haste. This time, they have been programmed to avoid finding themselves in the same situation as in March.The resuscitator explains that the patients transferred today are in a more stable state of health than those of the first wave. Beds should always be available in case more severe patients arrive. “The goal is never to be in a situation of no longer being able to receive”, adds Professor Bertrand Souweine.

A strategy “beaded“, According to the Directorate General of Health which is based on”logics of anticipation“. For the ministerial direction, “the generalized tension in healthcare establishments throughout the country limits the possibility of carrying out the transport of many patients at the same time“. The means of transport have also been optimized since the first wave. Unlike March, patients are mainly transferred by plane or helicopter and only in groups of two or four. Adaptations that allow more serenity among hospital staff.

“We learned from the first wave“

“We have a few more Covid patients but things are going smoothly“. Professor Eric Stindel, president of the medical commission of the CHRU de Brest is pleasantly surprised by the fluidity of interregional transfers. Since October 17, twelve patients have been received in Breton hospitals against seventeen in March. A reception capacity due mainly to the low density of the territories of Brittany and therefore to a weaker mixing of populations, according to the doctor. “We learned from the first wave», Adds the orthopedic surgeon, in charge of coordinating medical procedures at the CHRU in Brest. He details: “the SAMU welcomes and organizes the departure, the State takes care of all the transfers, the staff is better guided knowing that all the operations have not been canceled“.

Better adaptation both in terms of the schedules of nursing staff and means of transport makes it possible to limit the mobilization of medical resources, according to Stéphane Mulliez, director general of ARS Bretagne. Unlike March when all medical interventions were delayed, hospitals are trying to ensure minimum follow-up for patients who need it most. Not all resuscitation beds are therefore reserved for Covid patients. A situation which may further strain the flow of patients but necessary according to doctors to limit the deterioration of the condition of chronically ill patients.