” Follow the Raptor and keep the walkie talkie open “. We came to test a car, we meet in Jurassic Park. Or almost, in Picardy, at the Parc de Marquenterre, 1000 wild hectares of bird sanctuary, dune paths and hunting reserve. Game: no T-Rex, but mouflons of Corsican origin and wild boars.

Fortunately, we will not see any. No desire for a collision with a large male or a sow and its litter … No desire either to see the forester, at the head of the convoy, target these poor animals. As for the Raptor, this off-road pickup is the little (dare we say) brother of the Ford F-150, an ultra-powerful monster perfect for the worst conditions at any speed. Designed in Australia, a country that knows all about brutal lands, the Raptor is a toy in Picardy. We, behind the wheel of the Explorer, a little less.

The convoy before departure, with the ranger’s quad and the instructor’s Raptor in the lead

Needless to say, these machines have four-wheel drive and driving modes adapted to snow, sand… On the first part of the course, with sandy but very practicable paths, we drive electric. And yes, the Explorer is a plug-in hybrid (plug-in hybrid electric vehicle or PHEV in English) in the European version. It does not exist in a purely thermal version. Good for the atmosphere! For Ford, it is a way of greening its image and lowering the average of its CO2 emissions and thus to respect European standards. 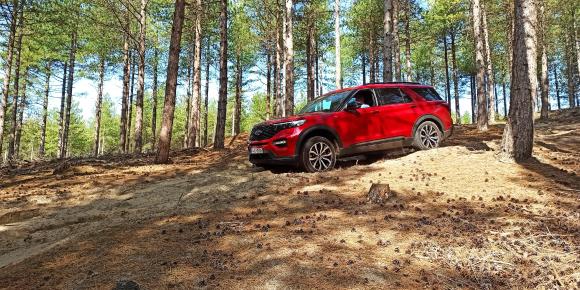 The SUV in the dune forest

In the United States, however, the Explorer is not available as a hybrid. There, especially since the election of Donald Trump, we don’t bother with ecology… Made in Chicago, the Explorer is a bestseller across the Atlantic, a must-have for road enthusiasts. trips. It is an XXL-sized SUV tailored to the country: it weighs 2 tonnes, is over 5 meters long, has 7 real seats and develops 400 (!) Horsepower (compared to 357 thermal and 100 electric in Europe). In short, it is a mastodon. But, once behind the wheel, if you need such a machine, you feel as comfortable as in a “European” SUV.

On the off-road course, called “Dakar”, you have to forget about the electric motor. This mode of propulsion indeed delivers too much power (too much torque to be precise) at low speed. 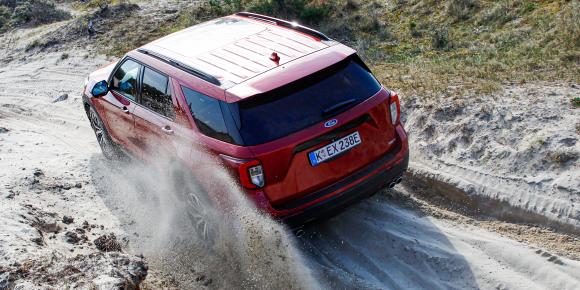 The Ford Explorer plug-in hybrid in the Parc du Marquenterre

We risk skating or ending up in the scenery – which is magnificent, that would be a real shame -. Only the heat engine is suitable for slopes and rough terrain. And even in all thermal, a fellow journalist will end up “tanked”. The shovel will then prove that it remains a topical tool. 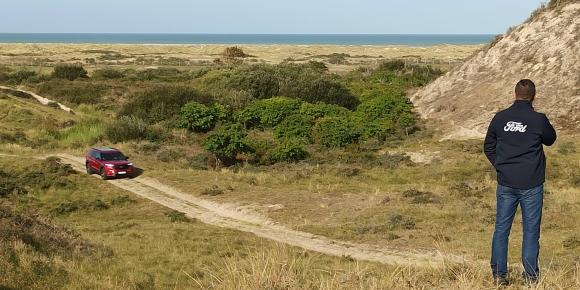 After the ranger’s quad, the Raptor pilot sets off and then waits for us at the top of a hill. ” It’s okay you can go He shouts into the walkie-talkie. Ok, OK … Courage, let’s go … ” Speed ​​up, speed up! “, he hammers. Our co-pilot, clinging to his seat, echoes him. ” Go speed up “. Impression of floating on earth at full speed … It’s not Jurassik Park anymore, it’s Star Wars. Phew, it’s okay. 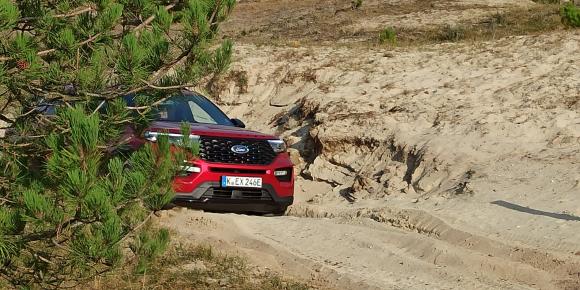 End of crossing the dune

Ditto for the other “delicate” sections of the course (broken dunes, climbs and descents on very soft sand, in the middle of pines, etc.). The Explorer is a brave beast that swallows abuse. But to take very steep paths or to cross streams, it is not suitable. You then need a real all-terrain vehicle.

For the small roads of the Picardy hinterland, the Explorer is at ease. The ride is comfortable, the dashboard classic but well designed. Finally, the handbrake is well positioned (not too far back). But in the alleys of the small village of Gerberoy that we cross, the SUV is really disproportionate. Here, it’s the Oise, not the Far West.