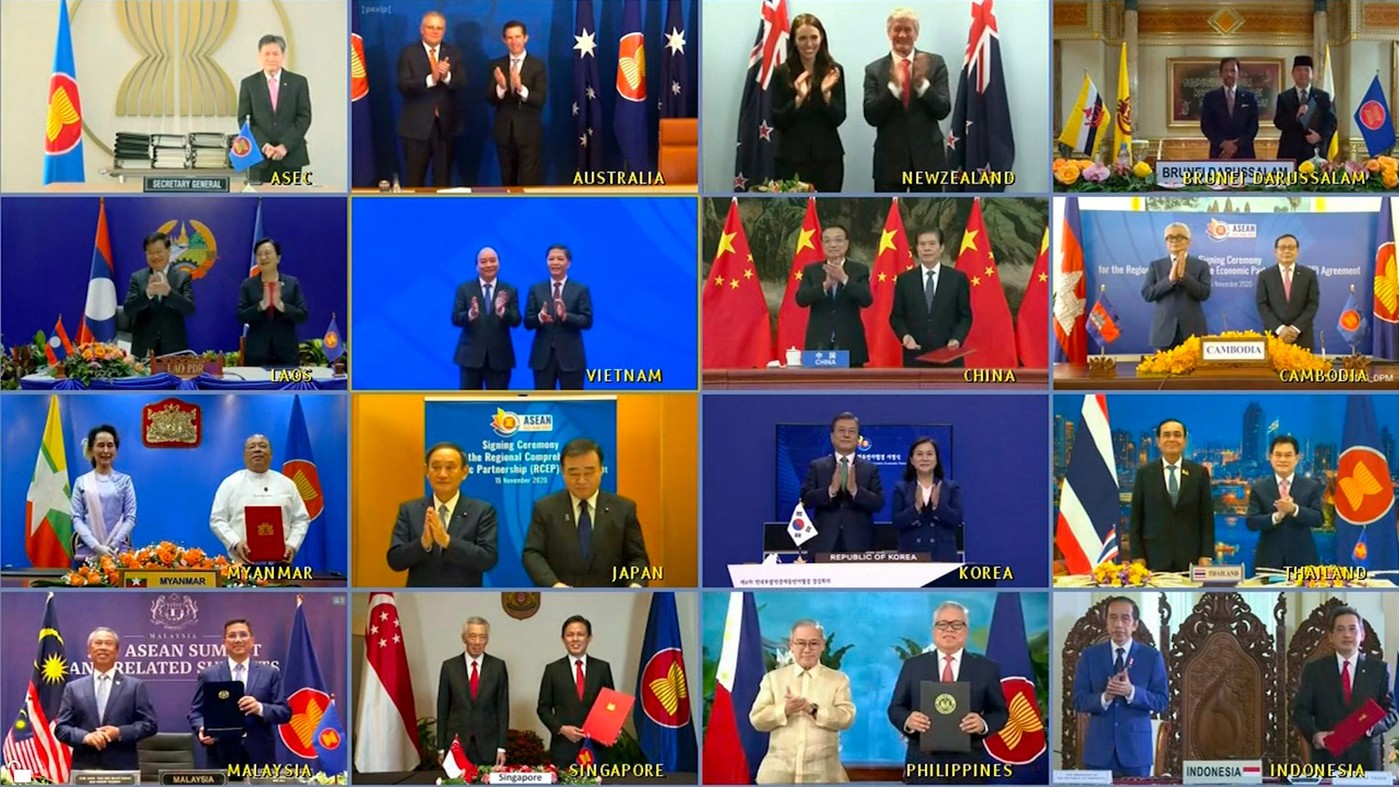 ► What is this new Asian free trade agreement?

Fifteen countries in Asia and Oceania gave birth on Sunday, November 15 to a Regional Comprehensive Economic Partnership (RCEP) after a four-day summit in Hanoi. This partnership provides for the elimination of 90% of customs tariffs between member countries and common rules for intellectual property. “I am happy that after eight years of complex negotiations, we can officially end the RCEP negotiations today”, said Vietnamese Prime Minister Nguyen Xuan Phuc, whose country holds the rotating presidency of ASEAN.

The agreement brings together the ten members of ASEAN (association of Southeast Asian nations): Brunei, Burma, Cambodia, Indonesia, Laos, Malaysia, the Philippines, Singapore, Thailand and Vietnam, as well as the region’s largest economies: China, Japan, South Korea, but also New Zealand and Australia. India had also planned to integrate this set, before changing its mind at the last moment.

RCEP becomes the world’s largest trade agreement, applying to nearly a third of the world’s population and accounting for 30% of the world’s gross domestic product. In comparison, the common market of the European Union weighs around 19% of world GDP.

► Where does the initiative to create this Asian partnership come from?

This draft treaty saw the light of day in 2012. It is the first multilateral agreement to which China adheres and appears as a way for this country to assert its influence in Asia. “The agreement took eight years to be negotiated, which is normal for this kind of text”, explains Cécilia Bellora, head of the Trade Policy program at the Center for Prospective Studies and International Information (Cepii).

“Discussions accelerated when the United States decided to exit the trans-Pacific treaty in 2017. China then saw the opportunity to reaffirm its interest in the region and to push back the United States, which remains behind. ‘outside this alliance’, decrypts the researcher. “The interest of this treaty is to create growth for member countries, whose trade will increase. But it is also about creating cooperation, because countries from the same trading block can then fairly quickly discuss common standards. And all this will happen without the United States ”.

► What is the difference between RCEP and its competitor, the Trans-Pacific Treaty?

The Trans-Pacific Treaty is a trade alliance promoted by Barack Obama, and of which China is not a part. Upon coming to power, Donald Trump decided to leave the table of discussions. Despite this departure, negotiations continued, giving birth in 2018 to a “Comprehensive and progressive agreement on trans-pacific partnership”, the CPTTP.

Unlike RCEP, it is open to American countries: Canada is part of it, as are Mexico, Chile and Peru. Seven countries are members of the two alliances: Australia, New Zealand, Brunei, Japan, Malaysia, Singapore and Vietnam. The CPTPP has eleven members in total.

In terms of size, the Trans-Pacific Alliance remains smaller, with five times less population and half the overall GDP. The CPTPP also plans to lower customs barriers. But it goes further in terms of social and environmental standards.

On the contrary, RCEP focuses on reducing tariffs. It requires less political concessions. “The big advantage of RCEP is that it clarifies the rules of origin, explains Cécilia Bellora, from Cepii. For companies in member countries, this is a significant gain, because it simplifies trade ”.

Yet Asia is an area where a large part of the world industry is concentrated. We can therefore expect to see the development of production chains, which will be based in several RCEP member countries.